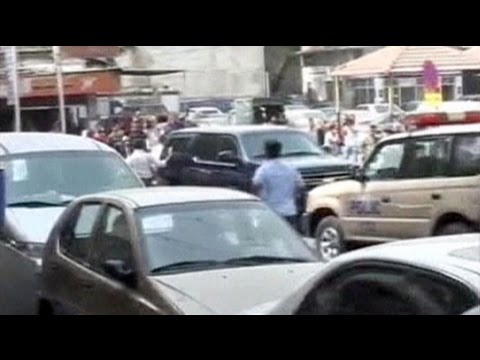 A pro-Baath mob in Damascus attacked the convoy of US ambassador Robert Ford, pelting his and other vehicles with tomatoes and eggs. Ford has visited dissident cities as they protested the regime of President Bashar al-Asad, and been denounced by the government for interfering in Syrian politics. The regime has consistently attempted to paint the protesters as agents of sneaky foreign intelligence services. Secretary of State Hillary Clinton denounced the regime of Bashar al-Asad for the incident, calling it “intimidation.” Euronews has video:

Meanwhile, in the small Syrian town of Rastan in Homs Province, loyalist troops appear to have run into heavy fire from defectors to the rebels, leaving 7 Syrian troops dead and at least 3 civilians, maybe 7 according to Aljazeera Arabic. Homs Province had been a recruiting ground for the Baathist Regime seeking to bring Sunnis into the military, and it is so far unusual in seeing significant defections and consequently a militarization of the political conflict there.

Two broad coalitions of Egyptian political parties have threatened to boycott the elections set for November 29 if the Supreme Council of the Armed Forces (SCAF) does not ban high officials and politicians of the old National Democratic Party of Hosni Mubarak from running for parliament. In nearby Tunisia, the interim government forbade some 16,000 persons closely associated with deposed president Zine El Abidine Ben Ali from participation in politics. The Egyptian parties appear to want something of this sort. At the moment, not only can NDP poobahs run for parliament, they have some advantages and could well end up dominating it. Parties are effectively excluded under the current electoral law from running for one third of seats reserved for independents, many of which may well be NDP members who can exploit being well known and well-connected, as compared to the unknowns in most of the new political parties. Even the Muslim Brotherhood, earlier the military’s teacher’s pet, has joined in the boycott call, though they are not supportive of the demonstrations called for today at Tahrir Square by the New Left organizations.

Heavy fighting broke out again on Friday in Yemen around the southern city of Taizz and in the north, between rebels and forces loyal to President Ali Abdullah Saleh, who returned to the country last Friday. In the past week, Yemeni security forces have killed 100 protesters, so that the Saleh regime is now displaying a brutality similar to that of the Baath in Syria. Tom Finn reports for VOA from the ground in Sanaa, arguing that the conflict in Yemen is becoming more violent.

Interim Tunisian Foreign Minister Mouldi Kefi tells AP that the Tunisians are ready for parliamentary elections on October 23. He said that unrest has subsided through September as groups begin putting aside sectional demands and focusing on the upcoming polls. Campaigning begins October 1, with some 100 parties contesting for seats. He maintained that Tunisia’s elections less than a month from now will be a bellwether for the whole region. Secularists in Tunisia are afraid that the fundamentalist al-Nahda Party, banned under Zine El Abidine Ben Ali’s dictatorship, will dominate the elections. But the leftist Progressive Democratic Party is convinced that the fundamentalists can be held to only 20 percent of seats, and that you could well see a leftist majority.

The Bahrain government covered itself in further shame by sentencing 20 physicians on trumped up charges. The real reason they are being targeted is that they treated dissidents during last spring’s protests, which were crushed by the Sunni monarchy. Punishing physicians for treating people is barbaric.

The forces of the new Libyan government claimed to have made some progress toward taking the hold-out city of Sirte, announcing that they had retaken the city’s airport. They made a similar claim two weeks ago, only to be pushed back by Qaddafi loyalists, but this time say they have a stronger position. The Transitional National Council forces also said that they had cleared a corridor allowing two wings of their forces to link up. Most Libyans live along the Mediterranean in a string of small cities, along with the metropolises of Tripoli and Benghazi. The TNC has authority in 97 percent of Libya now, with a couple towns of 100,000 each yet to fall. As might be expected in a revolutionary situation, it has been difficult for the TNC to arrive at a consensus about the shape of a new interim government, and it has decided instead to hold elections sooner than originally envisaged.

On the other hand, Daniel Serwer reports from Tripoli on the fastest post-war recovery he has ever seen. A month ago Tripoli lacked water, food and services and there were fears of turmoil. Now, it has provisions and public order is passable. The achievement of the Libyans in this regard is astonishingly little recognized in the world press, which for some reason has a bias against the revolution and against the TNC, having decided that it likely will fail. The Libyans have put the lie to such pessimism repeatedly,including when they made a popular uprising against dictator Moammar Qaddafi in Tripoli itself, even before rebel troops could enter the city. The country faces severe challenges, but give it a little credit for these achievements so far.