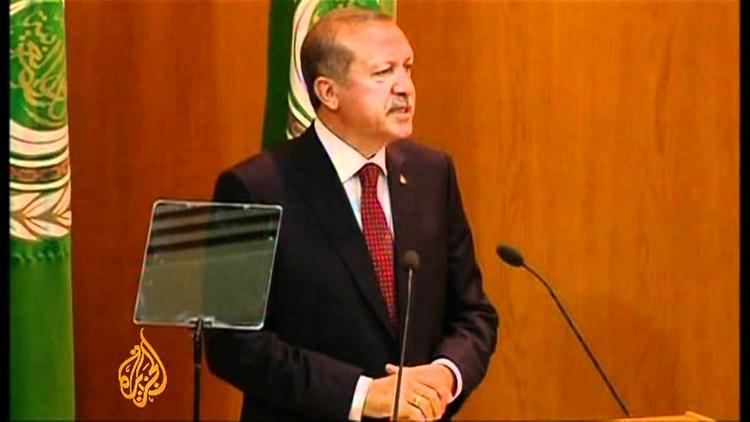 Turkish Prime Minister Tayyip Erdogan’s speech at at the Arab League on Monday and at the Cairo Opera House on Tuesday made waves in the West because of his denunciation of Israeli policies toward the Palestinians and the warm public welcome he received among Egyptians.

But a controversy has broken out about a television interview Erdogan gave while in Cairo in which he said, , according to al-Sharq al-Awsat in Arabic, “Now, in this transitional phase in Egypt, as well as in what comes after it, I believe that the Egyptians will establish democracy very well, and they will see that a “secular state” does not mean “an irreligious state.” Rather it means respect for all the religions and giving all individuals the freedom to practice religion as they please.”

Erdogan’s remarks drew an immediate rebuke from Essam al-Arian, the number two man in the Egyptian Muslim Brotherhood’s sponsored political party. He said that Egyptians did not need to be taught about democracy by Turkey.

In an Arab context, Erdogan’s Justice and Development party is not seen as a truly Muslim-religious party, since it does not work for the implementation of sharia or Islam’s version of canon law. Turkey has a secular constitution, and attempting to overthrow it is quite illegal. Al-Arian and his faction of older Muslim Brothers do not want a separation of religion and state in Egypt, on the Turkish model, and so were alarmed that Erdogan was promoting it. Younger Muslim Brothers are said to be more positive toward Erdogan’s stance in this regard.

Erdogan’s party is cautious about challenging seuclarism in Turkey because it is illegal to do so and past Muslim parties have been removed from power or dismissed for taking that stance. Egypt has no similar recent tradition of imposed secularism from the top in the law, though on a de facto basis the old Hosmi Mubarak regime did sometimes put disabilities on the religious parties.

Al-Arian in past statements has underlined that his party would not seek to abolish pluralism in Egypt. But it is disturbing that he reacted so vigorously to Erdogan’s remark. If you weren’t trying to turn Egypt into a Sunni version of Iran, it is hard to see why you’d be so upset with what Erdogan said.