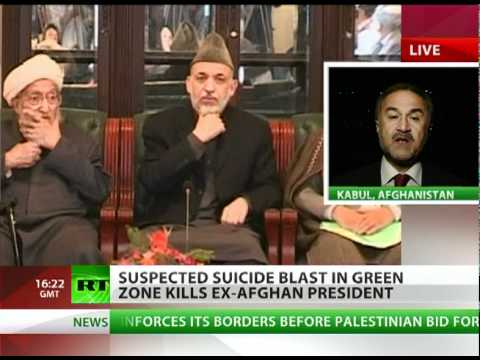 Burhan al-Din Rabbani’s assassination late Tuesday was a further signal that things are going very badly in Afghanistan. Rabbani is a former president of Afghanistan (1992-1996) who, however, was impossible to work with and was therefore sidelined after the overthrow of the Taliban (whom he fought) in 2001. He was recently brought back by President Hamid Karzai, however, to head a peace commission trying to reach out for talks to the Taliban and other insurgent forces fighting the Karzai government. Rabbani, because of his Muslim fundamentalist credentials, was plausible for the job, though the Northern Alliance he represented had resisted any peace with the Taliban. Radicals opposed to the negotiations therefore wanted him eliminated.

Last week, Rabbani was in Iran for a conference aimed at interpreting the Arab Spring as an Islamic awakening, which was addressed by Iran’s Supreme Leader Ali Khamenei. While there, Rabbani reaffirmed the close ties of Kabul with Tehran (a position often taken by Tajik Sunnis and Hazara Shiites, but most often rejected by Pashtun Sunni hard liners such as the Taliban, who are closer to Pakistan).

Rabbani opposed the US and NATO presence in Afghanistan and blamed it for the country’s turmoil. Russia Today has video:

The US now says Pakistan must move against the Haqqani Network, and that if Islamabad won’t do it, then Washington will attack unilaterally. This threat has produced outrage in Pakistan and further worsened relations between the US and Pakistan, which are fragile in the wake of the discovery of Usamah Bin Laden near a major military complex in Abottabad, Pakistan.

If the Haqqani Network turned out to be behind this assassination, as some analysts are suggesting, the US itch to act unilaterally would be reinforced. Rabbani’s attempt to negotiate with the Taliban was one of the few plausible end games for the Karzai government and for the US in Afghanistan. Those who want a Taliban victory (or a joint ISI/ Haqqani victory) in Afghanistan rather than a big tent settlement would have been threatened by Rabbani’s peace talks.

Rabbani was iconic of the turn of Afghanistan toward Muslim politics from the 1960s forward. From a Dari Persian-speaking (i.e. Tajik) background, Rabbani became the leader of the Jami’at-i Islami, the Afghanistan branch of the Muslim Brotherhood. He studied in Egypt and translated Sayyid Qutb, the Egyptian radical who inspired al-Qaeda, into Persian. Rabbani’s group fought the Communist government of Afghanistan 1978-1992, as part of the Mujahidin, whom Ronald Reagan termed “freedom fighters” and the equivalent of America’s founding fathers.

At the end of this period the Mujahidin took Kabul and Rabbani became president of a factious state that deteriorated into warlord rule. Rabbani worked out a deal with his rival Gulbadin Hikmatyar (a vicious far-right fundamentalist) whereby the latter would be vice president. The two fell out, however, and the forces of the president and those of the vice president fought each other so fiercely in Kabul in 1995 that they destroyed much of their own capital and killed some 17,000 people. It was one of modern Afghanistan’s major low points, and it paved the way for the Taliban to come to power, since Afghans were sick of the faction-fighting of the warlords.

It is ironic that the Taliban, who could not kill him when he was part of the Northern Alliance opposing their conquest of the northeast of the country in 1996-2001, have finally taken him out when he was attempting to play a very different role, of peace broker. After all, in Afghanistan warlords are a dime a dozen. But someone trying to make peace and reduce polarization– that is very dangerous to would-be revolutionaries who instead want to sharpen contradictions.