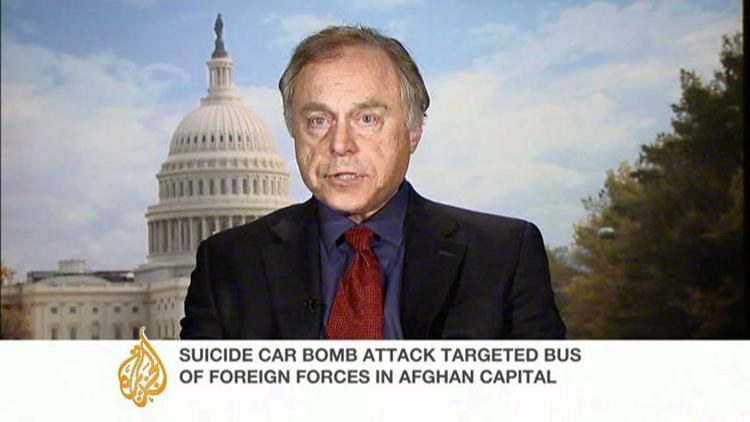 The Taliban claimed credit for a bombing of a bus in Kabul, which killed 13 US security personnel (apparently 5 US troops and 8 security contractors). Three innocent bystanders, Afghans and a policemen, were also killed.

Military officers focused on the big picture hate stories like this one, because, they say, ‘if it bleeds, it leads,’ without reference to whether it tells us anything about who is winning the war. In that regard, the bombing seems to me significant because it had to be based on an insider’s information. How many supposed Aghanistan National Army troops are actually sympathetic to the Taliban? The incident raises these questions of who is actually in control.

To get a sense of how the event was covered locally, consider this translation by the USG Open Source from a Pashto newspaper:

Kabul, 29 October: Sixteen soldiers of the ISAF (International Security Assistance Force) have been killed in two separate incidents. Sixteen soldiers of the ISAF were killed in separate attacks in southern Kandahar Province and in the Afghan capital, Kabul, on Saturday (29 October). According to reports, a car bomb attack was carried out on a foreign military convoy in the Dar-ul Aman area of capital Kabul today.

Spokesman for the Taleban Zabihollah Mojahed claimed responsibility for the attack and told AIP that the attack was carried out by a Taleb named Abdol Rahman Hazarboz through a Land Cruiser vehicle in which 700 kg of explosives were placed. Mojahed added that 25 senior foreign (military) officers were killed and many others were wounded in the attack. Many ISAF soldiers have been killed from time to time over the past some years. Thirty-one US special forces members were killed when a Chinook helicopter was shot down by the Taleban on 6 August in Wardag Province. But, it is the first time that so many soldiers have lost their lives in a suicide attack.

He said that eight ISAF and one Afghan soldier were also wounded in the attack and an ISAF soldier later succumbed to injuries. The ISAF and Gen Abdol Hamid said that the soldier who attacked them was also shot dead. Military observers say that foreign military causalities caused on Saturday in Afghanistan are very high. They say that as the US has expressed its willingness for talks with the Taleban, these attacks by the Taleban at such a critical time show that the Taleban are not willing to hold talks and still believe that a military approach can resolve Afghanistan’s issue and they can achieve victory in the battlefield. It is worth pointing out that today’s casualties of NATO in Afghanistan brought the total number of foreign soldiers killed in Afghanistan this month [sic, should be ‘year’] to 514.

(Description of Source: Peshawar Afghan Islamic Press in Pashto — Peshawar-based agency, staffed by Afghans, that describes itself as an independent “news agency” but whose history and reporting pattern reveal a perceptible pro-Taliban bias; the AIP’s founder-director, Mohammad Yaqub Sharafat, has long been associated with a mujahidin faction that merged with the Taliban’s “Islamic Emirate” led by Mullah Omar; subscription required to access content; http://www.afghanislamicpress.com)’