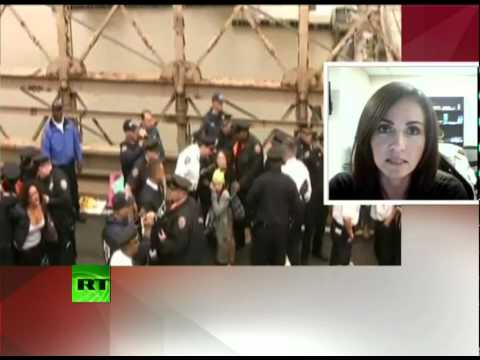 In two protests thousands of miles away from one another on Saturday, a similar spirit of demand for government responsiveness to the people was made. In both cases there was a police crackdown and some clashes broke out. But in one case, the government showed flexibility and attempted to take steps to calm the anger of the people. In the other, the government was silent and no changes were envisioned.

In New York, a group of protesters in the Occupy Wall Street movement marched off to the Brooklyn Bridge, and many marched on the road, blocking traffic. The New York police cordoned off both sides of the bridge and then arrested some 700 persons. The protesters have many demands, but a central one is that the Federal government should be representing the lower 99% of income earners, and not just the top 1 percent. They also want re-regulation of the bank and finance industries.

Across the world in Cairo Egypt, police cleared protesters from Tahrir Square on Saturday, provoking some rock-throwing. The square has been repeatedly occupied and cleared since the revolution began on January 25. I was there on August 1 when the fasting month of Ramadan began and most protesters went home, and the police were emboldened to move against the few who were left.

The protests started back up recently because of the election law. Parliamentary elections will be held in several rounds starting November 28. The election law specified that one third of seats would be filled by independents. At the same time, unlike the situation in Tunisia, the interim government has not banned politicians close to the former regime from running. The fear is that Hosni Mubarak cronies, because of their name recognition, money and networks of cronies, will run especially well for the independent seats. Other activists are angry that the state of emergency declared in 1981, suspending key civil liberties, has still not been abolished, and that a military junta directs the government, keeping power close to its medalled chest.

In response to the renewed round of protests, and to a threat by two big coalitions of political parties to boycott the polls if the law was not changed, the Supreme Council of the Armed Forces (SCAF) appears to have backed down, and will rewrite the election law so that all seats are apportioned on a party basis.

The SCAF also set out a timetable leaving office, with presidential elections set for next year this time after a new constitution is approved by referendum.

The military also agreed to stop sending civilians to military trials, a major complaint of democracy activists in Egypt.

On the other hand, there does not appear to be movement on abrogating the emergency laws, a major demand of the protesters, though chief of staff Sami Anan says that the SCAF will study the issue.

Every time the protesters and the parties mount a campaign over a set of issues, the military seems to back down and give them some of what they want. The July protests, mostly spear-headed by the New Left, resulted in half of the civilian cabinet being changed out for figures more acceptable to the protesters, and resulted in the trial of Hosni Mubarak and his sons, on which the SCAF had dragged its feet.

American government is often a kind of elective dictatorship, where politicians and bureaucrats feel that once they cast their ballots, the people should sit down and shut up and let those elected run everything and make all the decisions (even if those decisions clearly run counter to what the electorate was signalling it wanted). Thus, who could have imagined that by fall of 2011 there still had been no significant reform of Wall Street so as to forestall effectively a repeat of the 2008 crash? Surely such reforms were part of the change people voted for in 2008? But ‘legislative capture,’ the process in American politics whereby the industries and corporations regulated by Congress tend to ‘capture’ the legislators through campaign contributions, and then write the legislation themselves that regulates their industry, ensures that very little change can be enacted by Congress.

Since elected government is in the back pocket of the top 1%, and since the top 1% is using derivatives and sharp practices to speculate with the public’s money and is throwing people thereby out of their jobs and their homes, it is only strange that more people weren’t on the Brooklyn Bridge on Saturday.

When will American government show the flexibility and willingness to compromise on issues with an engaged democratic public that the generals in Cairo are showing?