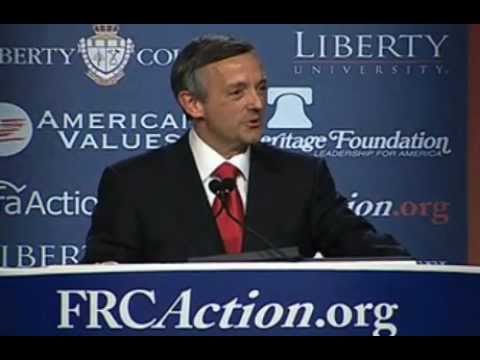 He strongly implied in his introduction that evangelicals would have a choice between a non-Christian ‘good man’ and a ‘born-again Christian.’ In later comments he explicitly called Mitt Romney a “non-Christian” and termed Mormonism “a cult.”

Perry tried to dissociate himself from Jeffres’ comments.

Nearly half of Americans views Mormonism negatively. In opinion polls, about 25 percent of Americans say that they would be less likely to vote for a Mormon. But fully 34 percent of white evangelicals report these sentiments.

About a quarter of evangelicals voted for Barack Obama in 2008

Of course, it is not clear what percentage of Americans is evangelical. By a narrow definition, they would be only 7 percent. By a more expansive one they would be over 40 percent. I personally think that the expansive definition is silly, and favor the 20 percent range for their proportion of the general population.

But some 44 percent of Republican primary voters in 2008 were evangelicals, so they are an outsized proportion of the party base. If they aren’t lying to pollsters about refusing to vote for a Mormon, the anti-Romney evangelicals constitute nearly 15% of the core Republican Party membership. They are unlikely to swing behind Obama if Romney is the candidate, but they do have the option of staying home. The other question is how many of the independent swing voters are evangelicals. And apparently few Democrats are going to cross the aisle and vote for Romney (in contrast, Obama attracted about 10 percent of conservatives in 2008).

I take the point that religious prejudice may be outweighed by economic considerations. But since we haven’t had a Mormon candidate for president before, we cannot be sure how this one will play out.

The Republican Party, is made up of a number of distinct constituencies. The party comprises Wall Street, much of the small town midwest and West, much of the rural population, and white evangelicals. Romney appeals to big business but not so much to evangelicals and the rural and small town people. Perry appeals to evangelicals but Wall Street thinks he is a wild man (not to mention being dense as as a block of wood). Whoever the standard bearer is will automatically lose a significant portion of his party, and it is not clear how they will do with the swing independent voters.

Their second big problem is that no one can win the presidency without at least 40 percent of the Latino vote, and Jan Brewer and Arizona have likely killed that for Republicans in the general election.