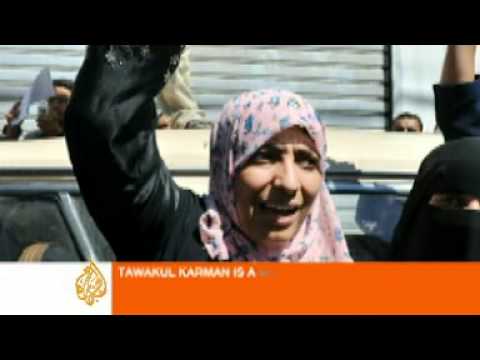 One of the three women awarded the Nobel Peace Prize this year is Tawakul Karman, 32, a Yemeni activist and mother of 3.

Aljazeera has an interview with her in English about how she carries on demanding democracy in Yemen in the face of threats to herself and her family.

For videos of her leading women’s protests, see Global Voices.

She also said that the prize honored the entire Yemen people, whose peaceful protests had stunned the world.

The Saudi newspaper al-Riyadh has a somewhat catty article alleging that in recent weeks the other protest leaders had fallen out with Karman because of what it terms her dictatorial style. It admits that they were nevertheless ecstatic to see her get the prize, since they see it as a sign that their reform movement is supported by the outside world.

The BBC showed her lionized by thousands of protesters in Sanaa’s Change Square on Saturday night.

Karman is a member of the Islah Party, which is made up of a number of competing factions, but it has a general orientation to a moderate Muslim fundamentalism. It was previously allied with Saleh, and he allowed it to do well in elections, but the party has now broken with the president. She has campaigned to raise the age of marriage for girls in Yemen.

Meanwhile, Yemeni dictator Ali Abdullah Saleh, pledged again to step down on Saturday. Few take him seriously, since he has pulled this ‘buying time’ stunt before and never followed through.