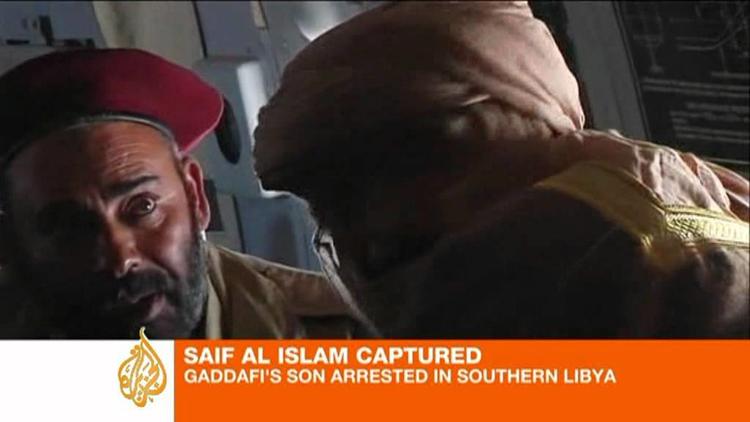 The capture of Saif al-Islam Qaddafi on Saturday has created a knotty set of political and judicial issues.

Saif was indicted by the International Criminal Court for war crimes. At one time the most reform-minded of Qaddafi’s sons, Saif faced a moral test from February 17 when the protest movement took off. He failed it miserably, shouting “let’s go, let’s go!” as he directed airplanes, tanks and artillery units to shell the demonstrating urban crowds. It is ironic that many in the Western Left, who now are rightly outraged about college students being pepper-sprayed by police at UC Davis while peacefully demonstrating, continue to defend the criminal Qaddafis, who attacked their own protesters with munitions rather more potent than pepper spray.

Although the International Criminal Court would very much like to see Saif Qaddafi brought to the Hague, ICC principles of complementarity do allow for a trial in Libya.

The interim Justice Minister on the Transitional National Council, Mohamed al-Alaqi, is insisting that Saif be tried in Libya. Though al-Alaqi maintains that Libya has the judicial infrastructure to ensure a fair trial, a post-revolutionary society in turmoil might be challenged in this regard. Al-Alaqi also is warning that Saif Qaddafi could receive the death penalty.

Libya’s new government should stop to consider that after the horror show of Muammar Qaddafi’s death and the exhibition of his mangled body, it has a lot of critics who need to be convinced that it is capable of instituting a rule of law. Delivering Saif to the ICC would go a long way in that direction. Moreover, having him tried abroad would be better for social peace in places like Sirte, where some still idolize the former ruling family. The ICC has the resources fully to establish Saif’s guilt and that of his father and brothers, which would be good for the new Libya. I understand post-colonial sensitivities about forwarding such a matter to an outside court, but the ICC is international, and Libya is a signatory to it.

Turning Saif over to the ICC will also require that the NTC interim government assert its authority and work out a deal with the Zintan militia, which is the force that captured Saif.

At the moment, al-Arabiya is reporting in Arabic that the people of Zintan are insisting on keeping Saif imprisoned in that town and resisting turning him over to the capital, Tripoli.

Zintanis are demanding a security portfolio on the next interim cabinet, as an acknowledgment of the key role they played in liberating the country. They fear that technocrats (some of them formerly having served Qaddafi) will marginalize the fighers and populations that actually made the revolution. But while Zintanis have a right not to be marginalized, they don’t have a right to do with Saif as they please. He should be turned over to the central government and, ideally, then delivered to the International Criminal Court.

Security, still shaky, is just good enough to have allowed Libya to get back up to producing 560,000 barrels a day of petroleum, up substantially from two months ago when production resumed. Before the war, Libya produced 1.7 million barrels a day, but during the civil war such production ground to a halt. Libyan authorities hope to return to producing 1.7 million barrels a day by June of next year, though some are skeptical that they can get past 1.2 mn. b/d next year. The return of the 2,000 foreign technicians may be important to restoring pre-war production.

Ironically, oil production depends in part on a perception of security and a rule of law. But bringing in the kind of money Libya could earn at nearly $100 a barrel could in turn contribute to a return to security and prosperity, as the government (which owns the petroleum) gains the ability to pay the bureaucracy and fledgling new army. For the time being, the refineries are being guarded by militiamen like those from Zawiya, but Libyans want them integrated into a national army, which will require resources as well as moral authority on the part of the NTC.

To get back to normal, Libya needs investment and trade, the prospects for which will be strengthened if it is perceived as a country where the rule of law prevails. Libyans would be doing themselves a huge favor to avoid the kind of fiasco that attended the execution of Saddam Hussein in Iraq, which struck most observers as more vendetta than due process. Images and symbols can be important in shaping public confidence, inside the country and abroad.