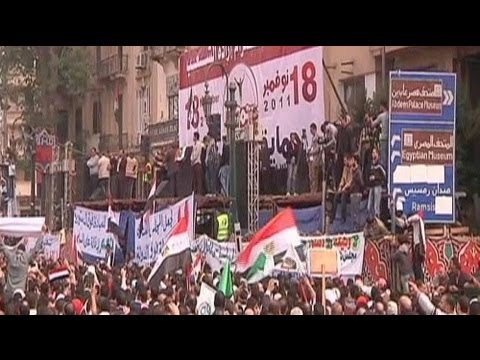 Al-Ahram reports in Arabic that hundreds of thousands of Egyptians all around the country protested on Friday against the military remaining in power.

The Muslim Brotherhood and the Salafi fundamentalists took the lead on the rallies, especially in Tahrir Square in downtown Cairo. But some liberal, leftist and youth organizations also joined in the demonstrations.

The Muslim Brotherhood is annoyed with the Egyptian military because the latter has issued guidelines for the writing of a new constitution, which are largely secular in character. The Brotherhood hopes to implement its conception of Muslim canon law or sharia in Egypt, and now perceives the military as a barrier to this project.

In July when I was in Egypt, the shoe was on the other foot. The New Left movement, April 6, came out for a return of the military to their barracks. The Supreme Council of the Armed Forces (SCAF) denounced April 6 and hinted that it would be prosecuted for taking foreign development money. The protesters almost fell down laughing, given that the Eygptian state receives $1.5 billion per year from the US.

At that time, the Muslim Brotherhood was in love with the military. I remember seeing Essam al-Arian, the number 2 man in the Brotherhood’s “Freedom and Justice” Party. speaking on television. He maintained that alongside the classical powers of the state (executive, legislature, judiciary), Egypt was fortunate to have a fourth power, which, he said, was like the backbone holding up the others. That power, he said, was the Egyptian military.

At that time, the military had scheduled the elections early, in September, a step that favored the Muslim Brotherhood because it is well-organized for contesting elections.

As the military has taken steps that angered the Brotherhood, that cozy relationship has faltered. The SCAF issued constitutional guidelines, which may make it more difficult for the Muslim Brotherhood to change Egyptian law further in a religious direction. And the miltary postponed the beginning of elections until late November, a step that benefits the secular opposition.

So the protests on Friday demanded not just that the military step down by next May but that it withdraw those constitutional guidelines.

The question of military rule has all along been the other shoe waiting to drop since the overthrow of Hosni Mubarak in February. The Egyptian military hopes for a co-existence with the civilian government once it is established next year. Friday’s protesters want a subordination of the military to the civil state.

The protesters, however, are themselves deeply divided on the reasons for their opposition to the military. The New Left minds its anti-labor policies. The Muslim Brotherhood (sometimes) minds its dictatorial tendencies.

What we saw in Turkey in the past decade is that if a party receives a large enough public mandate, its ability to stare down the military is much enhanced. Similar things could happen in Egypt, though likely it will be a long and drawn-out process.