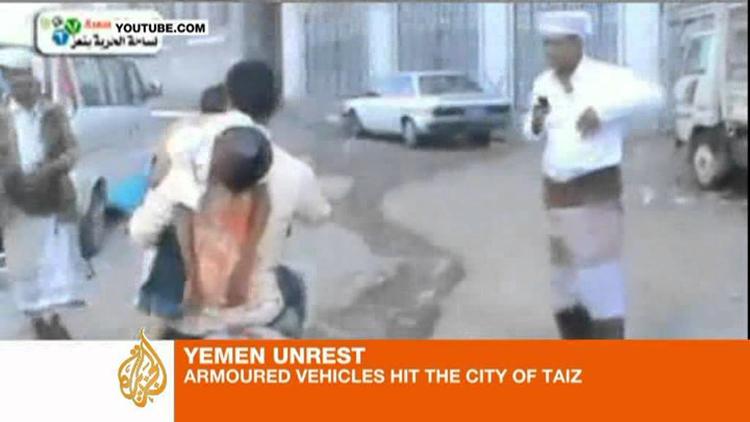 No one gives any credence to Yemeni President Ali Abdullah Saleh’s pledge on Monday to step down in 90 days, since he’s made such commitments before and reneged on them.

The Yemeni revolution shows no sign of subsiding, but it so far has not been strong enough to displace the president, who has ruled as dictator for decades.

Aljazeera English reports in Saleh’s crackdown at the city of Ta’iz, the country’s third-largest, on Friday.

Not only is there a problem with the formation of human capital, but there is a severe resource problem. Some 60% of Yemen’s income is from its small petroleum production. In ordinary times, it only produces 280,000 barrels and day, and exports 105,000 of them. Since the revolution began, Yemen’s oil exports have fallen because of poor security (one pipeline was attacked by rebellious tribesmen, costing the country hundreds of million dollars a year).

Aside from petroleum, which is difficult to export during a war, the Yemeni economy is taking a shellacking because of the uprising and its negative economic effects.

Some parts of Yemen are as badly off as drought-struck Somalia. Economists fear large numbers of displaced persons in Yemen.

Even if Saleh is overthrown, the question of how the new state can survive looms large. Seven million out of Yemen’s 24 million are living on less than one full meal a day.

The country faces a severe water shortage. Aquifers are falling and Sanaa may be out of water in only ten years. The problem might be confronted by systematic collection of rainwater and by switching to crops that are less water-intensive, but you would need an efficient government with popular legitimacy for such a program.

Yemen has many coastal areas with strong wind potential, not to mention highlands. A small wind project at Mocha was planned for 2012, but the political turmoil has probably impeded progress on it. Someone needs to buy Yemen lots of those new enormous 7-megawatt wind turbines, along with an electrical grid that can deliver the power around the country.

Saleh is clearly incapable of running Yemen in a forward-looking way. The country needs a new government desperately. But it also needs new sources of energy and jobs, which renewables could accomplish. All the violence we hear about in Yemen, including that of sectarian groups such as the Huthis and that of radicals such as al-Qaeda in the Arabian Peninsula, is driven in part by struggles over scarce resources, especially water rights.

For the world community to let Yemen sink would be for it to risk violence, terrorism, and displacement on a vast scale (millions of Yemenis could be forced to emigrate, potentially causing more disruption to their host country– likely Saudi Arabia). The world community not only needs to find ways of easing Saleh out, it needs to find ways of funding green energy projects in Yemen, which among all the countries in the world probably most urgently needs them. Yemen is facing the water and electricity shortages now that the whole world will likely confront in the not so distant future.

The costly US obsession with drone strikes on Yemen probably does more harm than good, Patrick Seale argues. The money would be better spent on solar energy and desalinization plants.