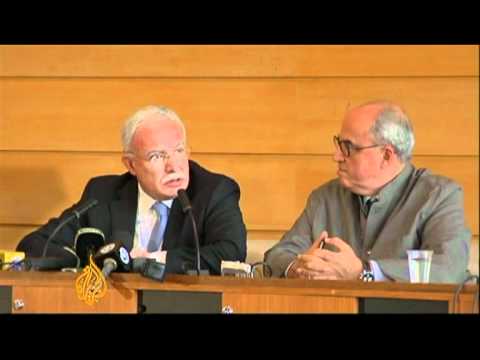 The United Nations Educational, Scientific and Cultural Organization recognized Palestine as a full member on Monday setting off a crisis between the United States and the United Nations that seems likely to further isolate Washington in the world and reduce its influence.

The UNESCO vote could start an avalanche of such acceptances among various UN bodies. Although Palestine is unlikely now to get a majority next month at the UN Security Council, there is always next year. And the admission of Palestine by large numbers of UNO organizations might anyway have a similar effect to a UNSC majority vote.

Countries such as Norway and Ireland have signaled that they would like to raise Palestinian representation to full embassy status, and every international vote like the UNESCO one encourages them further in this direction. In turn, embassy status could begin giving Palestine standing in some countries to sue Israel in third-country courts for torts such as land and water usurpation.

Since a law passed by Congress in the 1990s forbids the US from funding UN bodies that recognize Palestine, the Obama administration has no choice but to withdraw the $80 million a year it gives UNESCO, which is a fifth of the agency’s budget. But what this step really means is that the US loses influence over UNESCO, and indeed, it might well lose its membership in the organization. UNESCO may have to close some offices and lose employees. Or someone else, such as Saudi Arabia or China, might pick up the $80 million, gaining influence over UNESCO at US expense.

If the move becomes common, the US could end up further and further isolated and helpless. What if the International Atomic Energy Agency recognizes Palestine as a member? If the US cuts it off, it loses a key arena within which it has been pressuring Iran over its nuclear enrichment program. And so on and so forth.

The overwhelming influence in the US Congress of the Israel lobbies (including those of the Christian Zionists) are leading the US down a path of increasing international isolation and weakness. The US vote against Palestine is the headline on the Arab satellite television news programs, and even in India and Russia it is a vote that makes the US look like an ogre.

The UNESCO vote was 107 for, 14 against, and 52 abstentions; 14 were absent. The vote had to be won by a two-thirds majority of states voting “yes” or “no.” Thus, to abstain in this situation was more or less to help the Palestinians win.

That voting pattern, in turn, reveals the shape of US influence in the world. The vote was not simply the West versus the Rest. Although Latin America, Africa and Asia strongly supported Palestinian membership, so too in the end did France. And Britain and Italy abstained rather than voting against. The rising BRIC bloc, of Brazil, Russia, India, and China all voted for. There appear only to be about 14 pro-Zionist countries left in the world, 12 beyond the United States and Israel itself.

The Israeli ambassador to UNESCO called the vote “science fiction,” since, he said, it recognized an imaginary state. The old Israeli inability to see the 11 million-strong Palestinian people as a nation-state, which once led Israeli consuls in the US to promote letter-writing campaigns against US newspapers that even used the word “Palestinian” in their stories, is obviously still intact.

More important, UNESCO recognition of Palestinian cultural monuments as world heritage sites could well complicate the slow Israeli theft of Palestinian territory on the West Bank and in and around Jerusalem. That usurpation of land and resources is made possible because the Israelis engineered the statelessness, i.e. the national homelessness, of the Palestinians.

Palestine had been scheduled by the League of Nations for statehood, as a Class A Mandate, and as late as 1939 the British government was pledging a Palestinian state within a decade. The ethnic cleansing campaign of militant members of the Yishuv in Palestine and then by Israelis led to the expulsion of 700,000 or so Palestinians from their homes. But they didn’t just become refugees, losing all their property. They became stateless. Statehood is the right to have rights. Palestinians not only have no rights, they don’t have the right to have them. That is why the Israeli pledges to them in the Oslo peace process could be reneged on so easily. Palestinians are the nobodies of the Levant, the non-entities, the marks and fall guys.

The vote demonstrates again the sea change that has taken place in the international community regarding the Israeli-Palestinian conflict. I believe that there are several reasons for this change:

1. Everyone can see that the Israeli government of PM Yitzhak Rabin made undertakings to the Palestinians as part of the Oslo peace accords, such as withdrawal from the West Bank, on which the Israelis reneged.

2. The Israeli attack on Lebanon in 2006 made it look like a reckless bully.

3. The Israeli blockade of basic necessities for Palestinian non-combatants and children in the Gaza Strip from 2007 made the Israelis look heartless.

4. The Israeli attack on little Gaza in 2008-2009, where 40 percent of the population is camp-dwelling refugees whose families were expelled from what is now Israel in 1947-1948, made Israel look like a reckless bully.

5. The Israeli attack on the Turkish aid ship the Mavi Marmara on May 31, 2010, in which commandos killed 9 persons, one an American citizen, made Israel look like a reckless bully.

6. Constant Israeli announcements of expanded settlements on Palestinian territory are widely seen as breaking international law, as well as a form of theft.

Disgust with these Israeli policies of continually victimizing the Palestinians is so widespread and deep that even Germany has just threatened to cancel the delivery to Israel of a submarine because of the announcement of settlements in Arab east Jerusalem. Germany, for understandable historical reasons, almost never criticizes Israel. But the Likud attempt to expel Palestinians from their long-time homes in Jerusalem has pushed even Berlin to criticize the policy publicly.

It isn’t just the world community that is dismayed at the setting in of long-term Israeli Apartheid. Even the widow of Israeli war hero Moshe Dayan now laments,

“I’m a peacemaker, but the current Israeli government does not know how to make peace. We move from war to war, and this will never stop. I think Zionism has run its course.”…

“Today we use foreign labor to work in Israel because Palestinians are not allowed. And this continuous expansion of the settlements everywhere-—I cannot accept it. I cannot tolerate this deterioration in the territories and the roadblocks everywhere. And that horrible wall! It’s not right.”