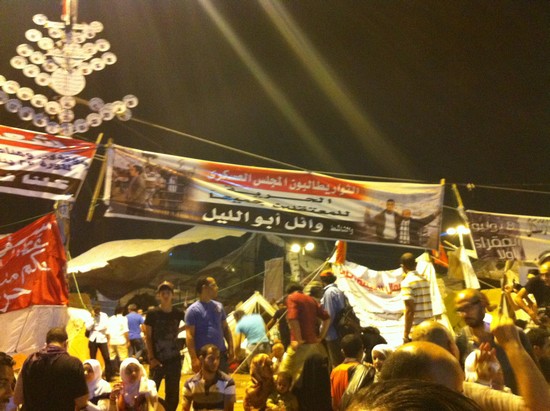 You did it! Thanks a million everyone for your warm and generous support. Here’s to a vibrant Informed Comment in the New Year, and may it bring you many good things!

I’d like to start by thanking those readers who supported Informed Comment last year in our annual fundraiser. Your contributions made several important trips possible.

I spent much of the months of June through August in Spain, Tunisia, and Egypt. Tunisia and Egypt were research trips, Spain was a jumping off point because of conferences there. Ironically, Spain is having its own popular youth protests, which I saw in Barcelona, Toledo and Madrid before going on to the Middle East.

I went to Tunisia and Egypt because I was eager to see the aftermath of the revolutions there with my own eyes, and to collect pamphlets, booklets and other material on the upheavals. I even went around photographing graffiti and wall posters and banners (many of them later destroyed by the military), as well as interviewing people and attending political and cultural events.

Academic funding is hard to get for trips arranged at the last minute, and so has drawbacks for my style of academic journalism. Academic grants typically have to be applied for a year in advance, and in June of 2010 I would not have known I would want to go to Tunisia and Egypt in summer of 2011! I was able to get a small university grant for those summer journeys, but spent thousands of dollars out of my own pocket as well, using funds you donated to me last December during the 2010 IC fundraising drive.

Things look different on the ground, and I am certainly a better interpreter for you of the Arab Spring now because of having lived in two of the revolutionary countries.

In terms of visibility, Informed Comment welcomes about 10,000 visitors/day at its server, though it is impossible to trace how the posts are mirrored elsewhere or are emailed around or what their readership is in those forms. During peak events like the Egyptian revolution, daily visitors spike over 50,000 at the server alone. Informed Comment is typically one of the top weblogs in English language on world politics as ranked by Technorati.com. Your support helps me intervene in the debate on Middle Eastern issues in the United States and throughout the world.

Middle East issues are often framed by right wing media such as Fox Cable News as American nationalist ones, and unscrupulous “news” providers play on the comparative lack of good information and analysis to manipulate public opinion on these matters. Informed Comment is one of the few solid counterweights to this (frankly) propaganda. Corporate news outlets, even relatively liberal ones, can almost never report on controversial issues such as the plight of the stateless Palestinians, because of fear of consumer boycotts. Informed Comment is unconstrained by such considerations.

Years ago I decided that I did not want to put “Informed Comment” behind a firewall and charge a subscription fee for it. That just isn’t who I am. In my own view, 9/11 kicked off a long crisis between the United States and the Muslim world that I felt a duty to attempt to interpret and analyze for both publics, not just for well-heeled elites. This is a democratic blog, for the people and in dialogue with the people, for the common weal. Still, considerable infrastructure and programming expertise is increasingly required to keep this site online, fast and improving— and it doesn’t come for free. I am therefore moving to a model of voluntary subscriptions or donations (however you want to think of the reader contribution to the maintenance of the site).

Voluntary subscriptions or donations can be sent to Informed Comment via the contribution link at the top of the right column (which takes Paypal payments or credit cards). Here is the direct link again:

For 2012, I have several projects at Informed Comment for which I’d like to those who can to support. These plans continue to serve the larger goal of promoting understanding between the West and our neighbors in the Middle East.

I intend to do more travel for research and journalism to places where important developments are unfolding affecting US foreign policy, including of course the Middle East.

I am setting in motion a plan for online free reference materials on the Middle East, both political and cultural. The standard would be short, clear, encyclopedia-like entries that reflect professional standards rather than popular ones. Maybe it will take the form of a closed wiki, so that some quality control can be instituted and colleagues among Middle East experts can make contributions.

More timely and vigorous discussion. Occasionally in 2011, my travels have required turning commenting off or leaving moderation until too late. I need a reliable assistant to moderate discussion in real time.

While Informed Comment will always stay lean and efficient, I do need your help to make all these projects a reality.

Those who donate $100 or more will receive a blue and gold Informed Comment Polo shirt. Some kind readers give more than once a year, but if you want the Polo shirt, consider making a single larger donation.

Your donation helps me keep Informed Comment independent and prolific. Together we keep independent media alive. I would like to thank all my readers and contributors again for your support in 2011 and look forward to an even more productive 2012 together. Thank you for supporting our independent thinking and dialogue!