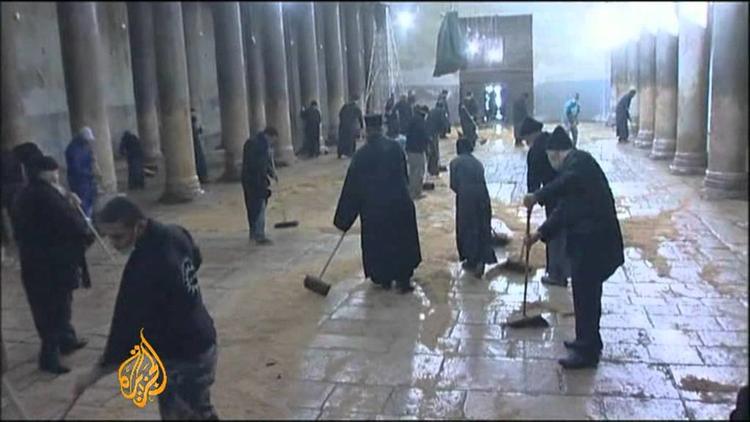 The Church of the Nativity in Bethlehem has now seen its annual brawl between Armenian and Eastern Orthodox priests, who are jointly responsible for its administration. Police of the Palestine Authority broke it up but made no arrests because the pugilists are “men of God.”

Somehow you get a sense that Jesus of Nazareth would not have approved of his own followers coming to fisticuffs over his birthplace. Wasn’t there something about turning the other cheek? Wouldn’t the Christian thing to do be to abandon one’s claims to the physical site and devote oneself to the spiritual meaning of it?

Such scuffles at the Church of the Nativity between priests of the churches that administer it are common.

Indeed, such conflicts have sometimes spiraled out of control and contributed to the outbreak of major wars. Thus, [pdf] we can read in this article by Raymond Cohen about how struggles between the Roman Catholic and the Greek Orthodox church over their position in administering this church, and that of the Holy Sepulchre in Jerusalem contributed to the outbreak of the Crimean War. Russia backed the prerogatives of the Eastern Orthodox or Greek Orthodox church, while France supported the Roman Catholic claims. The Ottoman sultan, who then ruled Jerusalem, was caught between the two.

So, at least no war has broken out in this round of conflict. Maybe it is an argument for the secularization of Europe. I think the spiritual life has great value, but when you get to the point in your religious attachments where you are beating people up over your claims to an old building, you’re no longer talking about spirituality, and a sane secularism would be far preferable.