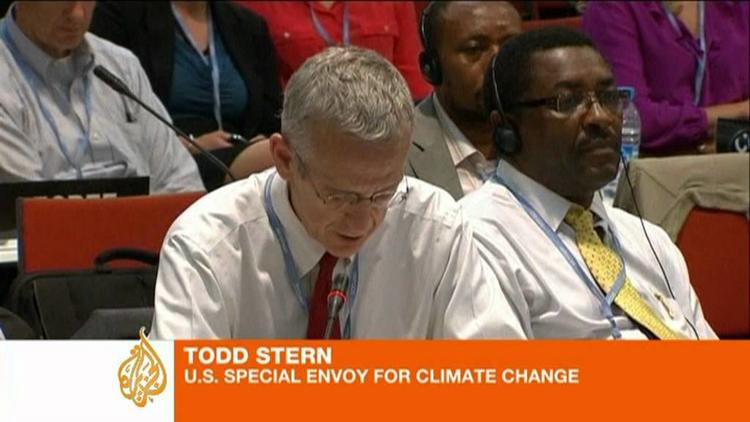 The global summit on climate change and curbing carbon emissions at Durban in South Africa ended on a positive note diplomatically. The international community rededicated itself to binding emissions limits and pledged four years of studies and assessment.

“This is a landmark achievement that creates real possibilities for scaling up the fight against climate change. It’s an excellent text that clearly sets points of action, points of commitment, and timetables, and it is legally-binding, so it is extremely effective, potentially, for responding to the need of climate change. We got what we came to Durban to get.”

Aljazeera English has a video report on Durban:

But as AP argues, the achievements of the diplomats are too little, too late.

The amount of greenhouse gases in the atmosphere is rapidly increasing, with a 6% increase in carbon dioxide emissions during the past year alone. At this rate, we are almost certainly looking at an increase of 3 degrees Celsius (roughly 5 degrees F.) by the end of this century.

It seems increasingly clear from the study of past geologic ages characterized by higher carbon dioxide concentrations in the atmosphere that earlier projections of the impact of the increased carbon has tended to be underestimated by scientists.

James Hansen and Makiko Sato have found that in the past, a one degree Celsius rise in the average surface temperature of the earth typically has resulted in an increase of the sea level of as much as 20 meters (roughly 65 feet, or 10 basketball players standing on one another’s shoulders).

The Durban conference was trying to find a way to keep the future increase to “only” 2 degrees C. (3.6 degrees F.). It probably failed to accomplish this goal. But Hansen’s research suggests that even that temperature increase would be too high to avoid catastrophe. The resulting increase in sea level would displace millions from coastal cities and wipe out a significant portion of the world’s wealth.

This is what Egypt would look like with a 30 meter rise in the sea level (courtesy Firetree): 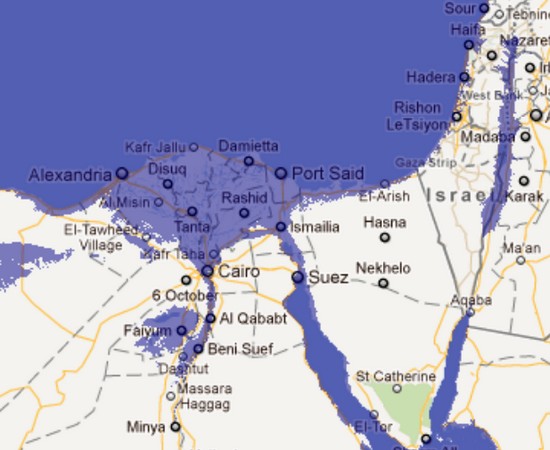 I.e. we would lose the Delta, where most people live (and as I mentioned last week, we would also lose Tel Aviv).

A really big question is how fast the increased temperature would cause big changes like sea level rise, loss of surface ice, ocean acidification, and extreme weather events. Some have argued that because the oceans warm very slowly, the most extreme consequences are centuries off (which is not actually that distant).

Hansen warns that in past geologic ages when there has been extra carbon, sometimes the changes occurred really rapidly:

“Two degrees Celsius of warming would … move Earth closer to Pliocene-like conditions, when sea level was in the range of 25 meters higher than today, Hansen said.”

(He means the warm Middle Pliocene, between 3.15 and 2.85 million years before present.)

In other words, 2 degree C. would wipe out the Egyptian Delta, as in the map above, displacing tens of millions of people and ruining the country’s agriculture. If I were Egypt, I’d go ahead and sue the carbon-spewers.

The most plausible solution to the world’s energy problems is solar, as with the Desertec Project in Egypt and Morocco. As Hansen notes, we aren’t moving nearly quickly enough on that front to avert disasters like the complete loss of the Netherlands and the Egyptian Delta and all of Bangladesh. I guess the question is now whether we can stop at a 3 degrees C. increase, or go on up to 5 degrees C. and lose one third of the world’s land surface.