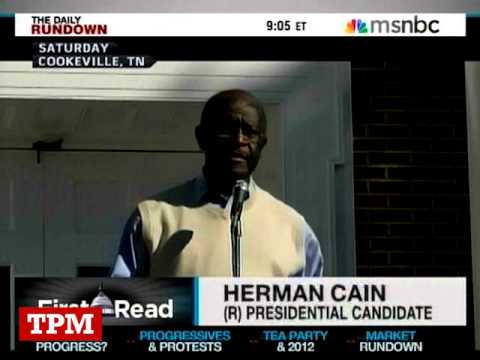 The most alarming thing about Herman Cain’s “suspension” of his presidential campaign is what it took to drag him off the stage. It wasn’t his cruelty, sexism, arrogance or rank ignorance about the world. But it should have been.

Cain predicted that the suggestion would be considered “insensitive.” He said that what is insensitive is that Mexicans come to the US and kill “our citizens.” Illegal immigration is a crime, but it is not a capital crime for which one would be executed, except perhaps in North Korea or other paranoid, totalitarian states. Murder rates have fallen in the United States, including in border states such as Arizona, in recent years, and decades of research has shown that immigrants are no more likely to commit crimes than citizens. Cain’s lack of respect for human life and his stereotyping of Latinos as especially violent murderers mean that Cain should have been out right there.

Cain alleged that China is “trying” to develop a “nuclear capability.” China’s first nuclear test took place in 1964. The country is estimated to have over 100 nuclear armed ballistic missiles, some 20 of which have a range such as to be able to hit the United States.

The Onion as usual gets this right.

Cain insists that women who are raped must bear the rapist’s child if they become pregnant.

Some 25,000 women are made pregnant by rapists every year in the United States. While women who wish to bear the child should be respected, no one should force a woman at the point of a policeman’s gun to be the baby mama of her rapist.

Cain’s stupid campaign ad with the creepy smile attempted to insinuate to America’s youth that it is “cool” and “rebellious” to smoke. It is one thing to fall victim to a nicotine addiction that one finds tough to kick; it is another to purvey images of smoking as positive. Smoking in the United States causes nearly half a million deaths a year, and nearly 50,000 deaths are caused by second-hand smoke. Those who have had the heartbreak of seeing relatives and loved ones die of lung cancer are not amused.

And, as others have observed, it is weird that credible allegations of sexual harassment of subordinates hurt him but did not knock Cain out of the race, whereas charges of a consensual affair did. What, it is only all right if he is coercive about it?

He should have been out right there.

Cain first didn’t seem to know what Libya was and then expressed worry about the Pashtun Taliban taking over this North African Arab and Berber state.

He should have been out right there.

In fact, had Cain said that illegal immigrants have to be treated in accordance with the rule of law, that women should have the right to choose their own biological destiny, that smoking and second-hand smoke kill way too many Americans annually, and that China is more trading partner of the United States than threat, Cain might well have been disqualified by some of those stances among Republican voters.

Which, taken all together, tells you what is wrong with today’s Republican Party.

They should be out right there.