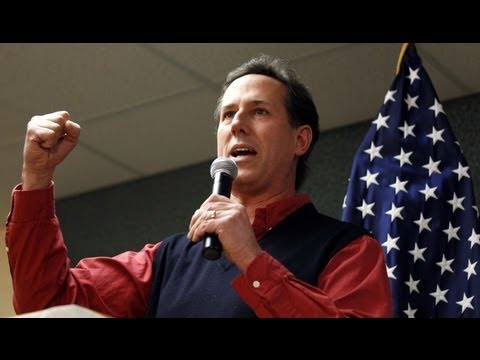 Rick Santorum attacked President Obama on Saturday for being “a snob” because, Santorum said, the president wanted all Americans to have a college education (Obama hasn’t actually said such a thing). Then it turns out that when Santorum was in the Senate he said he wanted all Pennsylvanians to go to college. Hypocrisy much? Moreover, Santorum has a BA from Penn State, an MBA and a JD, so when he says not everyone is cut out for college (the way he was), it seems to me that he is the one who is being a snob.

Santorum is cynically making a play for the Reagan Democrats, the white, ethnic blue collar workers who typically only have a high school education, and who are skittish about both Mitt Romney and Barack Obama. But whoever told him that they don’t aspire to a college education for their children doesn’t actually know any working class people.

Santorum has given ample evidence that despite all the taxpayer dollars wasted on his education, he failed to learn anything about how to think independently, which is what education should have taught him. So here are some things he might have learned if he had been paying attention, and which might have kept him from saying a string of silly things in public.

5. Santorum: “I’m for income inequality.” College could have taught him that too much income inequality has negative effects on a country, as is held by Fed chief Ben Bernanke, who has a college degree in . . . economics. In nations with high levels of inequality, periods of economic expansion are shortened to a third as long. And, persistent inequality that is felt to be unfair contributes to high degrees of social conflict.

4. Evolution isn’t “just a theory,” as Santorum has put it in his quest to have the pseudo-science of Creationism taught in biology classes. In science, a “theory” is a robust explanation for observed phenomena that accounts for all the known facts about them. So, physicists speak of the theory of gravity. It isn’t that they think gravity isn’t a fact, or that they entertain other explanations of why books always fall if you let them go in mid-air (for instance, that each book has an invisible elf on it who likes a giddy ride down to the floor and guides it that way). Likewise, biological evolution is one of the more solidly proved things in science, and has been repeatedly observed in nature. Whether a divine power has set the universe up in this way, so that evolution occurs, is a theological question for seminaries, not a question for high school biology classes. Only someone insecure in their faith would need to bolster it by attempting to insert it into non-theological realms like science.

3. Santorum, when asked about welfare in Iowa, said that he doesn’t want to make the lives of blacks better by giving them other people’s money. Some 84% of food stamp recipients in Iowa are white. A social historian of the United States with a college degree in history could have told him that welfare programs were created for whites and for a long time African Americans were not even eligible for them. They aren’t about race, but about providing a social safety net so that the needy don’t starve to death on our doorsteps. Moreover, most of the “needy” are only temporarily so, with people falling into the category (especially when they are young) and climbing back out.

2. Santorum maintains that Usamah Ben Laden was tracked because the US tortured al-Qaeda mastermind Khalid Sheikh Mohammad. Actually, Usamah was found by tracking his courier. But torture or “enhanced interrogation” is notoriously unreliable. Ibn al-Shaykh al-Libi under torture told the US government that Saddam Hussein of Iraq had trained al-Qaeda agents in chemical weaponry– a complete falsehood, which Dick Cheney and Condi Rice quoted in support of going to war with Iraq. Someone educated in a Security Studies Program could have given Santorum better information than his own little brain has been able to come up with. Santorum, notoriously, tried to instruct Senator John McCain in how torture works; McCain was tortured by the North Vietnamese while in custody there.

1. Santorum maintains that there is no such thing as a genuine liberal Christian because, he says, the plain text of the Bible is contrary to the principles of liberalism. He goes on to conflate liberalism with “liberation theology” (they are not the same thing). But the American Roman Catholic bishops of Santorum’s own church often take social positions that are recognizably liberal, basing them in scripture and in papal encyclicals. When it comes to feeding the hungry, caring for the poor, visiting prisoners, and doing to others as you would have them do to you, it is actually Ayn Rand style conservatism that is incompatible with Christianity. Santorum’s Bible appears to be missing the Beatitudes, and his Catholic education seems so defective that he is unaware of “Evangelium Vitae” (1995), which forbids the capital punishment that Santorum favors, or “Laborum exercens” (1981), which recognizes the right of workers to unionize, or “Caritas in Veritatae” (2009), in which Pope Benedict says, “Therefore, it must be borne in mind that grave imbalances are produced when economic action, conceived merely as an engine for wealth creation, is detached from political action, conceived as a means for pursuing justice through redistribution.” Sounds like welfare to me. Someone who studied religion in college might have been able to help Santorum avoid all these errors.