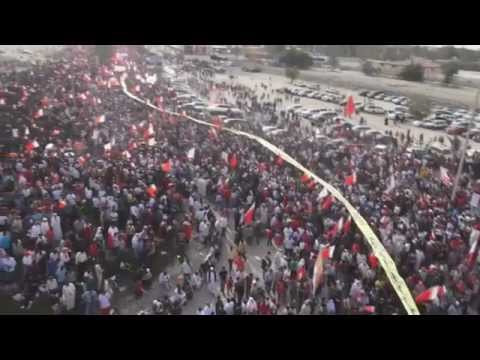 Tens of thousands of demonstrators came out in villages and along highways in Bahrain on Friday, reviving their protest of the islands’ absolute monarchy. Among the organizers was the Shiite Wifaq Party, which says it wants a constitutional monarchy.

Bahrain may have been two-thirds Shiite a few decades ago, but the Sunni monarchy has given thousands of Sunnis from Saudi Arabia and Pakistan citizenship. Nowadays, surveys show that about 58% of the population is Shiite. But this group feels that it is actively discriminated against in employment and other spheres. This majority also minds being politically marginalized, and wants changes in the constitution to reduce the perquisites of the king and to move the country toward popular sovereignty. Last year, the regime cracked down hard on protesters. But apparently they are still organized and have demands that cannot be forestalled by elite fiat.

The US has been timid about speaking out concerning human rights abuses in Bahrain because the monarchy leases to the US a naval base at Manama, which serves at the HQ of the Fifth Fleet. This fleet provides security to petroleum exports from the Gulf, which come to some 20% of the world total. Bahrain’s Sunni monarchy is also often seen in Washington and Riyadh as a bulwark against Iranian hegemony in the Gulf.

Bahrain has about 550,000 citizens and a similar number of guest workers. It is a minor petroleum exporter ( 150,000 barrels a day in 2011?), but is important mainly for strategic reasons and because of its vital finance sector.

Meanwhile the Shiite Sadr Movement in Iraq held demonstrations regarding Bahrain in several cities. The best-attended rallies were in Najaf and Amara, with thousands in attendance. In Wasit, Ali Sammar said that his group was answering the call of their leader, Shiite cleric Muqtada al-Sadr, to stage peaceful demonstrations in support of the Bahrain revolution. He explained that their demands included a call to the UN Security Council and the Arab League to take a decisive position in favor of the Bahraini people and to punish the Bahraini government for violating the rights of its people.

The Sadrists are demanding that the king of Bahrain be excluded from the Arab League summit to be held shortly in Baghdad. The Iraqi government of PM Nouri al-Maliki has attempted to reassure Manama that the Sadrists do not speak for the whole of Iraq. Al-Maliki, though more diplomatic than Sadr, is nevertheless also upset about the crackdown on Bahrain’s Shiite majority and the sending of Saudi troops into Bahrain.

Still, the Arab League summit in Baghdad is a coup for al-Maliki, and King Hamad Al Khalifah of Bahrain agrees that it is a signal opportunity to underscore Iraq’s return to the center of Arab affairs. Despite his disappointment in Bahrain policy toward its Shiites, al-Maliki is eager for regional recognition and acceptances, and unlikely to meet the Sadrists’ demand. He heads his own Shiite party, the Islamic Mission Party (al-Da’wa al-Islamiya), which is more lay and middle class than the Sadrists, who are disproportionately poor and more radical.