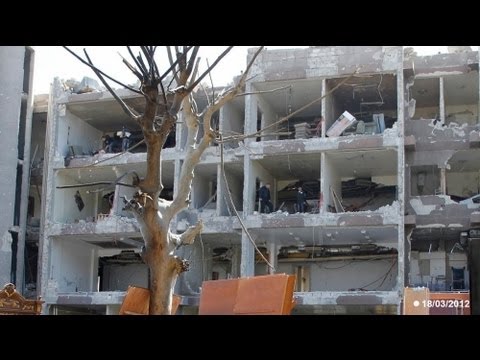 Syrian opposition forces fought the fiercest battle with government loyalist troops yet on Monday, in the tony El Mezze district of Damascus.

Damascus, the capital, has not seen huge demonstrations. This violence is the severest form of opposition that the capital has witnessed.

The Free Syrian Army, made up largely of defectors, has suffered major setbacks in the Baba Amr district of Homs and in Idlib in recent days. It made the mistake, as a guerrilla force, of trying to take and hold territory. Monday’s engagement in Damascus was better planned, as an operation showing the other Syrians that the oppositionists have hardly disappeared. The revolutionaries got off a rocket propelled grenade attack on the mansion of an officer. The building from which they fought sustained major damage from regime attacks.

At the same time, dozens of tanks were sent in by the regime to Deir al-Zor to put down the rebellion there.

Aljazeera has gotten hold of secret documents detailing the brutal strategy of the Baath regime in crushing the protests:

Meanwhile, hacked email shows that Asma al-Asad thought herself “the real dictator” and that she really likes to shop.