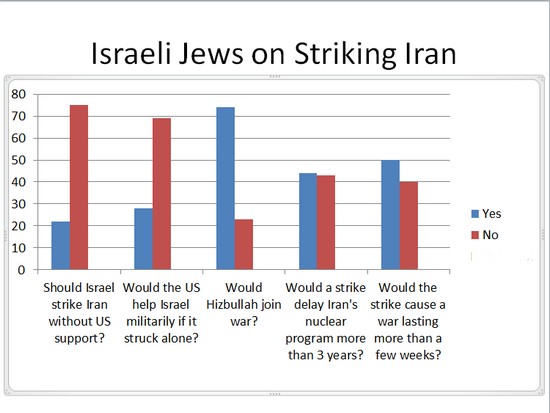 It is often the case in democratic societies that reasonable people get saddled with extremist governments. Israel is in such a situation at the moment.

Shibley Telhami, the Sadat Chair at the University of Maryland, has released an [pdf] opinion poll of Israelis concerning the possibility of a strike on Iran’s civilian nuclear enrichment facilities. Professor Telhami discusses the poll here.

To make the findings clearer, I’ve reworked them as yes or no questions and amalgamated the positions on one side or another, concentrating on the positions of Israeli Jews (20% of Israelis are Palestinians, and though their views diverge only slightly from their Jewish compatriots on this issue, here I am interested in the latter). It should be underlined that this is a carefully weighted sample of 500, so the answers could be plus or minus as much as 4 points; but even that shift wouldn’t change these startling findings. Here are the results:

The poll shows that the vast majority of Israelis does not think that their government should strike Iran without the support of the United States. It shows that only about half of Israelis think that the result of such a strike would be a delay in Iran’s nuclear program lasting more than a couple of years, and 12% believe it would accelerate the program. A fifth think it would have no effect at all.

Israeli Jews are for the most part convinced that if Prime Minister Binyamin Netanyahu and his Defense Minister Ehud Barak launched a unilateral air strike on Iran, they could not expect any practical military help from the US (only a little over a fourth believe Washington would send in the cavalry so to speak).

Moreover, half of Israeli Jews polled said they feared that the strike would set off a long-term conflict lasting months or (21%) even years! And, they are under no illusion that Lebanon’s Hizbullah would sit such a conflict out.

No wonder they don’t want to go it alone, since they are afraid such a strike will spark a regional conflict that will last for a very long time, and that they couldn’t hope for direct military support from the US if the defied Washington on the advisability of such an action.

They were also divided as to whether an Israeli attack might actually strengthen the Iranian state or at least leave it just as strong. Slightly more thought it would weaken Iran, but the spread isn’t that great.

As for their preference for a US president, Barack Obama has a slight lead among Israeli Jews over Mitt Romney and Newt Gingrich, and a big lead over Rick Santorum and Ron Paul. Given that all the GOP candidates but Paul have virtually joined the Likud Party and committed verbal genocide against the Palestinians, it is remarkable how little swayed Israeli Jews have been by these extravagant positions. Obama remains relatively popular with Israeli Jews, not despite his commitment to a peace process rejected by the Likud government but because of it.

Netanyahu is coming to Washington to be feted at the conference of the American Israel Public Affairs Committee, among the more effective lobbies in Washington. He will meet with President Obama and press him to support military action against Iran’s nuclear enrichment facilities at Natanz near Isfahan.

Obama and his security officials have made it abundantly clear that the administration opposes military action against Iran, and that it believes economic and financial sanctions are hurting Iran so badly that they are likely to force Tehran back to the bargaining table.

Obama should take heart from this poll, that he is on firm ground in telling Netanyahu “no.” Israelis are afraid a strike will result in a long war, and will bring in regional actors like Hizbullah. Obama has a lot of support in Israel, and he should go to the Israeli people directly with an address, explaining to them his policy and why he thinks it will be better for Israel than another war. Since Netanyahu shamelessly lobbies the American public, turnabout should be fair play.

The Likud actually got fewer seats than its main rival, the center-right Kadima Party, and is only in power because it could cobble together a coalition of other parties more easily than could Kadima.

Obama should disregard the most right wing government in Israeli history, and should listen to the Israeli public instead.