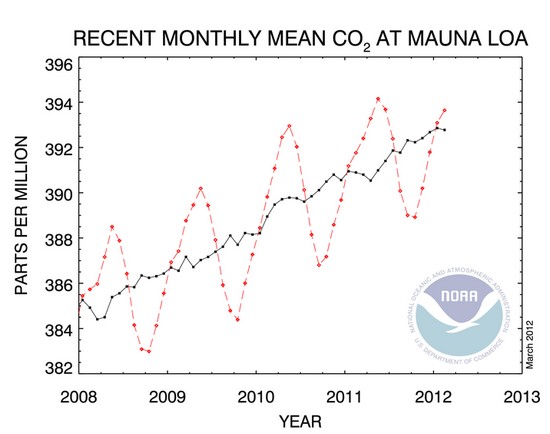 A new study just published in Nature Geoscience has found it plausible for the first time that the world’s average surface temperature could rise by as much as 5 degrees Fahrenheit (3 C.) by 2050, only 38 years from now.

In February, the United Nations warned that the world only has a few years to substantially reduce its dependence on hydrocarbons, if it was to avoid the disasters facing the earth with a temperature rise of more than 2 degrees C. The likelihood that such a rise in temperature can be avoided is now low (emissions were up 6% in 2011).

The study took advantage of extra computing power donated by individuals via Climateprediction.net.

The likely impact of temperature rise on North America will be much hotter summers and more extreme weather events. But it is Africa that will likely be struck by catastrophe, and within only a decade if we go on like we are. Projections suggest that in:

“Africa: By 2020, between 75 and 250 million people are projected to be exposed to increased water stress; yields from rain-fed agriculture could be reduced by up to 50 percent in some regions by 2020; agricultural production, including access to food, may be severely compromised.”

Increased drought and reduced crop yields and malnutrition are also expected in the Middle East over the next few decades as a result of climate change, including in Israel, and the new findings will accelerate the time scale over which these developments will occur. US foresees water wars in the Middle East.

There is also increased likelihood of flooding in parts of Asia, which we perhaps have already started seeing in Pakistan.

Another study, just published in Nature Climate Change, concluded that there is already a strong link between rising temperatures and extreme weather. In 1951-1980, it was only at most 0.2 percent of the globe’s land area that you had extremely hot summers. Now it is ten percent of global land area. And the change will be costly, even in North America. In 2011, the US was struck by 14 extreme weather events that caused more than $1 billion each in damages. That just isn’t normal, the paper argues.

Weather, as opposed to climate, is affected by cyclical things such as the el Nino. But those cycles now act out against a backdrop of discernible climate change, so that their effects can be amplified with calamitous results.

Thus, the 7,000 temperature records set or equaled in the United States during this March can probably not be explained only by weather (cyclical or one-time factors), but rather show the amplification effect of climate change (long term trends) caused by human beings dumping massive amounts of carbon dioxide into the atmosphere. The advent of spring in the US has already moved up 3 days, and 5 days in some states. The longer warm weather season has increased pollen and allergies, with the potential for increased childhood asthma.

The past decade, 2001-2010, is the warmest on record. 2011 should have been cooler because of a La Nina, but the warming trend owing to climate change was so powerful that it produced another record-breaking hot year.

With their unsustainable addiction to oil and gas to power a consumer society, human beings are carrying out a cosmic experiment with life on earth, one that could easily blow up in their faces. Human beings as we now know them are fairly recent, perhaps 120,000 to 200,000 years old, and their entire development has taken place in a relatively cold era. It is not clear whether they can survive a 10 degree Fahrenheit temperature rise over the next century and all the changes it will wreak on animal and plant life, on fresh water availability, and on the health costs of outdoor activity.

Consumers in the US are going to have to sue Big Oil and Gas if we are to get any serious change. As with cigarette smoking causing cancer, there is a tort here that juries and judges can eventually be persuaded to recognize.