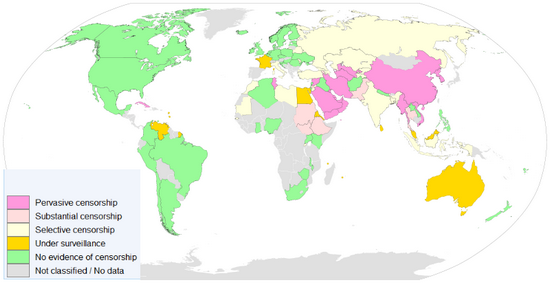 Supreme Leader Ali Khamenei, having strengthened his position in the Iranian parliament, is moving to try to control the internet in Iran. He has appointed a committee including lame duck president Mahmoud Ahmadinejad, officials from the Revolutionary Guards Corps, the head of the supreme court, and the speaker of parliament. The Iranian state has in the past spoken of developing a cyberspace network that works only in Iran and is disconnected from the world wide web. (I don’t think they get the concept of ‘the world wide web’.)

Ironically, during the lead-up to the parliamentary elections, the Supreme Leader appears to have ordered internet sites sympathetic to Ahmadinejad himself taken off line. So, the talk among the ayatollahs about the threat of the internet to morals is probably a cover for concern that it might help open up the political system, as has happened in the Arab countries affected by the Arab Spring.

Iran, along with China and a handful of other countries, has imposed the most extensive controls on the internet. (Informed Comment cannot be seen in Iran, or in parts of western Pakistan that get their internet service from Iran). There is some danger that the dark areas in the map below will spread.

In the map below, from 2010, blue means ‘no censorship,’ yellow means ‘some censorship,’ red means ‘under surveillance,’ and black means ‘heavy surveillance,’ to the point that the country is an ‘internet black hole.’ Wouldn’t it be nice if the United States were blue?