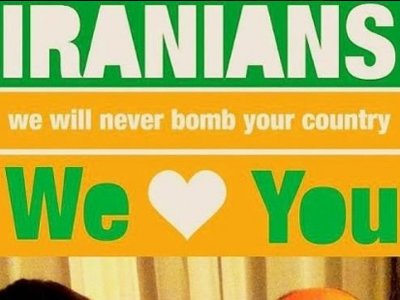 Haaretz reports that hundreds of Israeli peace activists marched in Tel Aviv on Saturday to protest all the talk of striking Iran’s nuclear enrichment facilities. Their placards demanded “No to War with Iran,” and “Talks, not Bombs.”

The boldness of this march, given the rightwing political atmosphere in Israel, should not be underestimated. Devastated at the polls and quiescent for years, the Israeli left has in the past year begun finding its voice. The J14 movement of street protests for affordable housing and education brought hundreds of thousands of Israelis into the streets last summer and fall. It is well known that many of the protesters skewed left politically and privately oppose the concerted settlement of Palestinian land in the West Bank.

The peace activists and the social justice organizers are offering a new discourse about the good society that differs perceptibly from the old, Labor left. For instance, Uri Savir, President of the Peres Center for Peace, argues for a two-fold strategy. He admits that the Arab Spring makes it more important than ever for Tel Aviv to give up the dream of “Greater Israel” and to draw back from the West Bank, since Israel’s Arab neighbors will never accept that millions of Palestinians should continue to live under occupation. But he takes a harder line against Iran, urging a close American alliance, sanctions, and a military strike as “a last resort.” In essence, he is reversing the policy of the Likud government of PM Binyamin Netanyahu, which routinely risks strained relations with the executive in Washington, sees a strike on Iran as an urgent priority and not a last resort, and is redoubling efforts to colonize the Palestinian West Bank with Israeli squatters.

As welcome as Savir’s common sense is (and it seems to represent Israeli President Shimon Peres’s own thinking), he seems strangely tone deaf to the dangers that ‘crippling’ sanctions on Iran will lead to war, and strangely detached from reality in thinking it is still plausible that Israeli squatters in the West Bank can be removed or that there is enough of it left to form a basis for a Palestinian state. The UN is now reporting that the Israeli state is actively helping West Bank Israeli squatters to steal water resources and springs that belong to the Palestinians, depriving the latter of water and turning the springs into revenue sources and even tourist sites. Colonialism is theft.

In a context where Savir’s position is so far left that probably only a handful of members of the Israeli parliament would publicly sign on to it at this point, the Iran peace march in Tel Aviv is a breath of fresh air.

The dead end of conventional Israeli politics is well summarized by journalist Stav Shaffir of J14, who pointed out to Jweekly that the electorate seems to vote on security issues rather than social issues: “People vote like tomorrow there’s a war and they choose the best general. While doing that, we get a government that abandons all responsibilities. Society isn’t better when you build a better airplane, but when you [offer] a better education.”

Although unconnected to the peace march, another project of Israeli doves is a Facebook page set up by husband-wife team Ronny Edry and Michal Tamir to promote people-to-people positive relations between Israelis and Iranians.

The world-wide trend to big money dominating conventional politics has also affected Israel, where the country’s burgeoning prosperity is increasingly poorly distributed. This problem of creeping plutocracy is not only an issue for young people who can no longer afford apartment rent. It is the same plutocrats who own munitions factories and benefit from war, and who can buy parliamentarians to serve as their ventriloquist dummies. But when conventional politics is seized by gridlock, the people invent new forms of politics. We may be seeing glimmerings of a new Israeli politics of peace.