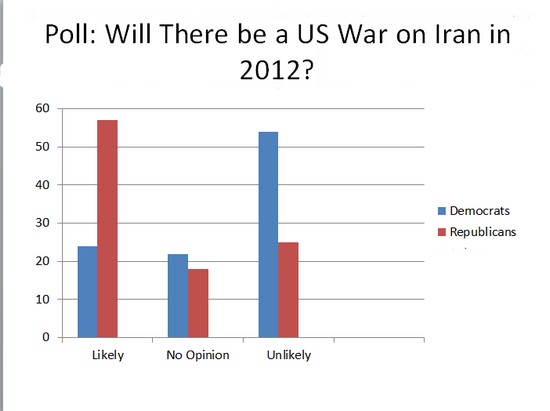 Percentage Likelihood of US-Iran War in 2012 by Party

The Poll Position has done a scientific poll of the American public on how likely they feel war is with Iran in 2012. They were split, but what is really interesting is the partisan divide.

A majority (57%) of Republicans believe that the US will attack Iran this year, whereas only a quarter say no.

In contrast, only 22% of Democrats thought an American-Iran war likely, with a majority (54%) saying it is unlikely.

These findings raise the question of whether the Republicans are engaged in the polling version of Freud’s “wish fulfillment” in dreams– that is to say, you have to ask if they really want a war, and so believe it is likely.

Another disturbing finding is that among age groups, it is the 18-29 demographic that is most likely to believe war imminent, with 46% saying it is likely this year. Did the Bush adminisration, with its invasion of Iraq, raise a generation of Americans to believe that war is the normal state of affairs?

Here is the methodology: “Poll Position’s scientific telephone survey of 1,152 registered voters nationwide was conducted March 04, 2012 and has a margin of error of ±3%. Poll results are weighted to be a representative sampling of all American adults.”