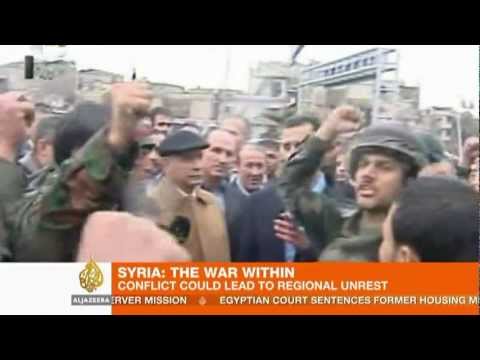 Aljazeera English (below) asks whether the Syria crisis will spill over onto neighbors and what impact it may have on the region.

In fact, the longer the crisis goes on, the more likely it is that it will have consequences for its neighbors…

5. As Syrian refugees flow into Turkey, the possibility of Syrian-Turkish clashes grows.

4. As small arms flow into Syria, bought up by the revolution, they can be sold back onto the market and flow into Jordan, which has in the past seen heavy fighting between the central government and tribal groups in places like Maan over smuggling.

3. Likewise, the Palestinian refugee camps in the region could be flooded with small arms weapons, encouraging the reemergence of a militant faction, with negative implications for all concerned, including Israel.

2. In Iraq, the dominant Shiite parties tend to support al-Assad, whereas the Sunnis mostly support the revolutionaries. Renewed sectarian tensions in Iraq could produce further turmoil.

1. Lebanon’s fragile peace could easily be disturbed. Sunni leader Saad Hariri, supported by Saudi Arabia, supports the uprising. Many observers blame the Syrian Baath Party for assassinating his father, Rafiq al-Hariri, in 2005. At the same time, the party of the Southern Shiites, Hizbullah, supports Bashar al-Assad and is patrolling the border to keep weapons and aid shipments from going to the opposition. Renewed Sunni Shiite fighting could break out over Syria.