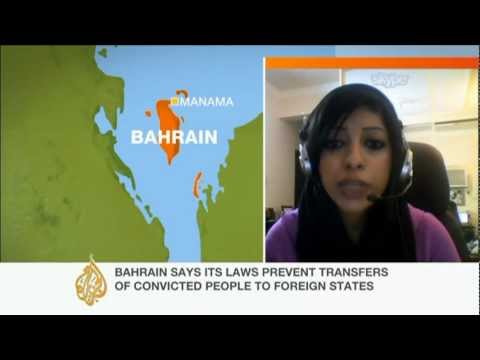 The crisis in Bahrain continues to boil along, despite the harsh crackdown of the Sunni monarchy on the protest movement (made up largely of the Shiite majority, but also supported by some Sunni parties). The crackdown has left about 83 dead in the past year, and hundreds have been imprisoned. Abd al-Hadi al-Khwajah, a protester and hunger striker that the Bahrain authorities have sentenced to life imprisonment, is in very bad health. Aljazeera English reports:

Al-Khwajah’s plight and that of the other political prisoners are raising questions about the holding of the Grand Prix Formula One race in Bahrain this year (it was cancelled last year). Aljazeera English reports:

The USG Open Source Center translates these two reports from Bahrain opposition web sites. (Al-Wifaq is the major political party of the Shiite majority. It demands a constitutional monarchy and revisions to the constitution. Shiites in Bahrain feel that they are discriminated against in employment, education and basic rights by the Sunni monarchy. Al-Wifaq is led by cleric Ali Salman, a moderate.)

Al-Wifaq.net in Arabic [website of Bahrain’s largest Shiite opposition group] … is observed to carry the “text” of the Friday sermon delivered by Shiite cleric Ayatollah Isa Qasim. In his sermon, Qasim says that “Abd-al-Hadi al-Khawajah was unjustly sentenced to life imprisonment” and according to the reports of Human Rights organizations, “his health condition has become too frail and his life is at risk.” Qasim adds: “This portends a very grave national and human rights crisis the negative results of which are certain.” He explains his opinion by saying: “If Al-Khawajah dies, it would be one of the ‘unforgivable’ crimes of the regime and this would lead to a serious deterioration of the security situation in the country.” The report cites Qasim as saying: “We do not call for any armed intervention by any party, but we need more serious pressure to be put on the Bahraini regime by its ‘strategic allies,’ instead of their supportive words and stances that encourage the regime to commit more acts of violence.”…

“[The] Bahrain Mirror in Arabic [Pro-opposition website] says that the Al-Wifaq National Islamic Society has urgently summoned its cadres to set up an around-the-clock operations room to follow up on the developments in the issue of Abd-al-Hadi al-Khawajah who has reportedly reached a critical stage due to the 56-day hunger strike. The report adds that Al-Wifaq’s Secretary General Ali Salman has changed his tone on this issue by saying that “the regime will be held responsible for the consequences of whatever harm is done to Abd-al-Hadi al-Khawajah.”

The United States has widely been accused of hypocrisy in declining to criticize or sanction the Bahrain authorities for their intolerance of dissent, while jumping up and down about dictatorship in countries the US government dislikes, such as Syria.

For an excellent analysis of political dynamics in Bahrain, see Laurence Louer at the Carnegie Endowment for Peace