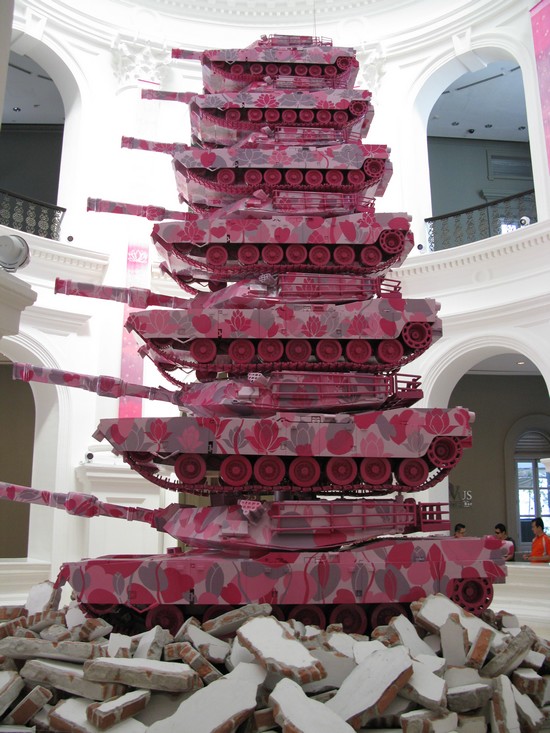 Photograph by Juan Cole at the National Museum of Singapore, June, 2009:

Tanks, synonymous with the landscape of war, are instrumental war machines in the propagation of western supremacy.

Pagoda, adorned with lotuses and often part of a temple compound, believed to be the padmasana, the seats of gods and goddesses who rule this world, is the shape of temples and a symbol for the levels of pure love in Eastern cultures.

This work expresses the interaction between the East and West cultures – an interaction which often ends in clashes. The adaptation of these cultures is symbolised through the visual language of seven tanks stacked on top of one another forming a tall structure resembling a Pagoda. The tanks are decorated or camouflaged with red lotuses and the juxtaposition transforms the killing machine into one that conveys love and peace to humankind.

About S. Teddy D.
Artist S. Teddy Darmawan was born in Padang in 1970 and graduated from Indonesia Institute of Arts, Fine Arts Department, Yogyakarta. He was Artist in Residence in Aachen, Germany and was selected for best five of Phillip Morris Awards 2001 (Indonesia).”