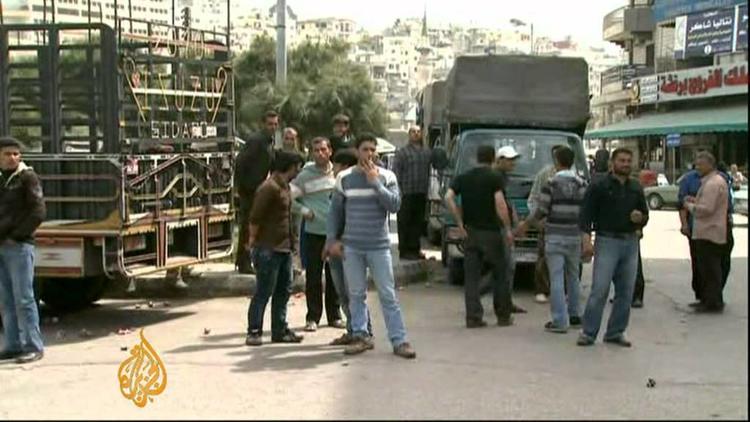 Fighting on Monday in Homs and other Syrian cities left some 160 dead on Monday, and, ominously, Syrian troops fired into Lebanon and Turkey, killing 3 persons. The Syrian crisis has escalated into a civil war, and now it is threatening to involve Syria’s neighbors.

The Syrian military attacked the town of Rastan near Homs with artillery barrages, killing 52, and did the same thing to Tal Rifaat near Aleppo, killing 45 there. They shelled homes in Latamna near Hama, killing 36 (Latamna was allegedly the site of a massacre by the troops last week).

About 23 of the dead were Syrian security forces, and 8 were members of the Free Syrian Army. The res, killed by sniper and other fire, were civilians.

The Los Angeles Times alleges that the Syrians killed at the Kilis camp in Turkey on the Syrian border were watching a nearby firefight between revolutionaries and Baathist troops when bullets cut them down. Six others were wounded.

In Lebanon, a firefight in a nearby village produced a heavy barrage of firing over the border, killing a cameraman for the al-Jadid network.

The Lebanese and the Turkish governments both issued strong protests to Damascus over the cross-border incidents.

The Lebanese prime minister, Najib Miqati, said “We condemn the act of opening fire from the Syrian side on the Lebanese media team, mainly as this team was operating within Lebanese territory.”

Miqati is allied with Hizbullah, a strong supporter of the Syrian regime, but when Syrian gunfire is killing Lebanese on Lebanese soil, even he is forced to speak out. Lebanon is welcoming increasing numbers of Syrian refugees, which could also drag Lebanon into the conflict. Aljazeera English has video:

On a visit to Beijing, Turkish Prime Minister Tayyip Erdogan charged that Syria had infringed Turkey’s border, and that as a result Ankara was considering what steps to take, including those “we don’t want to think about.”

Turkey is seeking Chinese know-how in building nuclear reactors for power generation. But likely Erdogan also pushed China to take a harder line against Syrian president Bashar al-Assad. Turkey and China are also both interested in mediating the Iran crisis, over its civilian nuclear enrichment program.

The conflict in Syria can now be characterized as a Civil War without any qualification, according to the J. David Singer definition

““Sustained military combat, primarily internal, resulting in at least 1,000 battle-deaths per year, pitting central government forces against an insurgent force capable of effective resistance, determined by the latter’s ability to inflict upon the government forces at least 5 percent of the fatalities that the insurgents sustain.” (Errol A. Henderson and J. David Singer, “Civil War in the Post-Colonial World, 1946-92,” Journal of Peace Research, Vol. 37, No. 3, May 2000.)”

Worryingly, the civil war is now spreading over regional borders, leading to deaths outside Syria.

Doyle McManus at the LAT argues that the Syria crisis is getting to be so big and troublesome that the Obama Administration may well ultimately decide that it must intervene, as happened under Clinton in the Balkans.