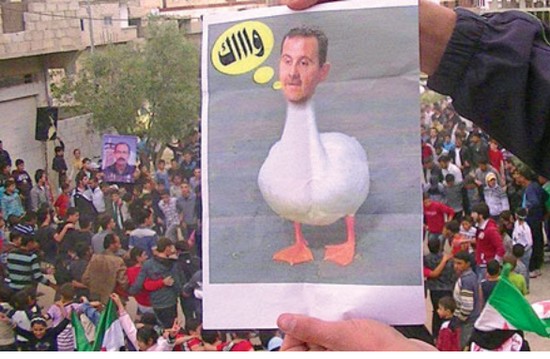 On the first day since the Baathist regime of Bashar al-Assad maintained that it had accepted a ceasefire with its opposition, tens of thousands of Syrians came out into the streets to protest. The regime did not, as promised, pull tanks from the streets, so that the crowds were thinner than they might have been. But al-Sharq al-Awsat reports that throughout the country 640 demonstrations were held.

CBS’s Elizabeth Palmer manages to report from a demonstration in a Damascus suburb:

The Arabic press reported 12 dead, but Western wire services mostly gave it as 6. Some reports have it lower yet.

The UNSC is meeting Saturday in an attempt to work out the practical details of sending UN observers to Syria to ensure that the cease-fire is observed.

Few in the opposition believe that al-Assad will really allow free peaceful protests, and al-Sharq al-Awsat carried this graphic in a story on the distrust of the regime among oppositionists, who have turned to ridiculing al-Assad: