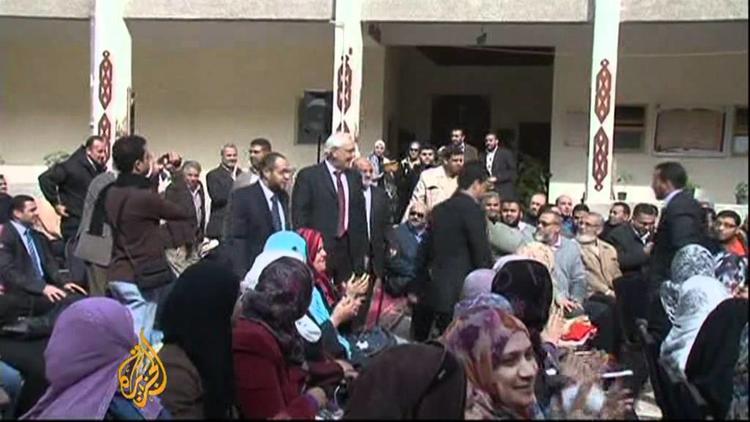 Aljazeera English on the Muslim Brotherhood’s Khairat al-Shater and his plans to run for the presidency of Egypt:

“Article by Muhammad al-Suruji entitled: “10 important questions on al-Shatir’s nomination” dated 4 April. The article says that the liberals and leftists have reacted violently against the nomination of the MB candidate Khayrat al-Shatir to the office of president. They are launching a campaign of distortion, deception and accusations. Meanwhile, the Egyptian public at large is sympathetic to al-Shatir’s nomination. There are 10 facts which should be discussed in this connection. The first fact is that the MB Group changed its mind about nominating one of its candidates for the presidential office when it saw the situation in Egypt systematically deteriorating and attempts were made to outflank and neutralize the revolution. The second fact is that it is not true that the MB Group is seeking to monopolize power, but is adopting the policy of partnership with other political parties and forces. The third fact is that no divisions or splits appeared in the ranks of the MB Group, but there were differences of views. The fourth fact is that more than 50 per cent of the Shura Council of the MB Group supported the nomination of an MB candidate to run for president. The fifth fact is that it is absolutely untrue that the MB Group concluded a deal with the Supreme Council of the Armed Forces. The sixth fact is that we should not expect a confrontation between the MB Group and the Supreme Council, particularly that MB policy is peaceful and always tries to avert confrontations with others and to please them. The seventh fact is that no power in Egypt can dissolve parliament because it was elected by the people. The eighth fact is that the scenario of Algeria or HAMAS cannot be repeated in Egypt where there is a situation that is different from Algeria and Gaza. And the tenth and last fact is that if al-Shatir wins the presidential elections, it will not be the MB General Guide who will rule Egypt although the MB Group is known for the close cooperation among its members.”

for background, see the National Geographic documentary on the Egyptian Muslim Brotherhood of last spring:

National Geographic ‘Inside the Muslim Brotherhood’ from Nick Norman-Butler on Vimeo.