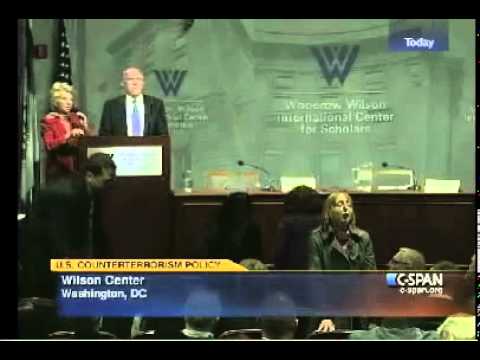 Walk into any US bookstore and the stacks are crowded with hundreds of books on the wars in Iraq and Afghanistan. Yet more than a decade in, its hard to find anything on the escalating use of armed drones by the United States.

Now Medea Benjamin, co-founder of the US women-led peace movement Code Pink, is seeking to balance the shelves. Her new book Drone Warfare has just been published. Benjamin, along with Reprieve and the Center for Constitutional Rights, also recently organised the first major international conference on drones in Washington DC.

The gathering coincided with the first anniversary of Osama bin Laden’s killing by US Special Forces. And just a day later, President Obama’s chief counter terrorism official John Brennan gave the most detailed insight yet into the ‘secret’ US drones programme. Benjamin was the sole protestor to disrupt the speech, as the press corps looked on.

In a candid interview with the Bureau following the conference, Medea Benjamin speaks about why the US peace movement has collapsed under Obama; of the challenges of taking on the drone war in a US election year, and of the message that US campaigners plan to take to Pakistan in a forthcoming trip.

Q: You’ve been involved in peace activism for a long time, and were heavily involved in the Bush years. In some respects the wars go on but the peace movement doesn’t. How difficult is it to engage on drones with a Democratic administration in the White House, and how is this going to play out in an election year?

Medea Benjamin (MB): It’s terrible. The vast majority of people who were part of the peace movement under Bush have disappeared. Whether they’ve left because they want to leave it to Obama, and that they’re happy that he for the most part withdrew the troops from Iraq and they’re hoping he will do that shortly in Afghanistan, and think that the drones are an alternative to a broader war. Or it’s people who are excited about the Occupy movement and want to put their efforts into the first chance that they feel they’ve had in a long time to make some changes on the domestic front. Or they have been so financially devastated by the economic crisis that they really don’t have time to commit to these issues.

For all sorts of reasons our movement is a tiny portion of what it was under the Bush years. And that makes it very hard. And the fact that during this election campaign you don’t have a voice from the Left, you don’t have a Dennis Kucinich, you don’t have a Ralph Nader, and you don’t even have a Ron Paul, a libertarian Republican who is speaking out against the wars and the empire and the drone strikes.

So there’s going to be little debate on foreign policy during this election, and if anything, it’s going to be Mitt Romney saying ‘Don’t put a date for pulling the troops out of Afghanistan’. And I don’t think he’s going to criticise Obama at all on these drone strikes, if anything he’s totally gung-ho for it. So it’s going to be pretty miserable in terms of trying to insert this message into the elections.

There’s going to be little debate on foreign policy during this election.‘

We will try as much as we can, going out to events and being there with our model drones, and getting on the inside when we can, saying ‘Stop the killer drones!’ And we’ll be going to the conventions, will have contingents who’ll be marching against drones, against the killing of civilians, against the continued war in Afghanistan. But to be realistic, we are not a very strong force at the moment.

And I think we recognise that and we realise that we are starting from almost nothing at this point. When you see a devastating poll that says that 8 out of 10 Americans think it’s OK to kill terrorist suspects, and that it’s even OK to kill Americans with drones, we’ve got a lot of educating to do. So I think it’s going to take us a couple of years even to turn those polls around and then get onto the job of stopping the use of drones. So it’s not going to be easy.

Q: It seems a particularly testosterone-driven period at the moment, with the recent anniversary of bin Laden’s killing. US TV screens are full of a certain sort of swaggering male perspective. Code Pink is very much a women-driven organisation. How difficult is it to engage with that attitude?

MB: It’s very difficult to engage with that swagger, especially when that’s now coupled with a technology that people seem to just drool over. They love these drones, they love the hi-tech, there’s a fascination with it. It’s boys’ toys that get exhibited everywhere.

As we were meeting in our drone summit, there was a science fair going on in the Convention Center across the street from us, where they were simulating drones overhead in Washington DC for the kids. And the kids just loved it. So yes it’s swagger, it’s testosterone coupled with boys’ toys. Which makes it even more difficult.

So we women are up for the challenge [laughs] and we recognise that this is a moment when, just like after 9-11, women’s voices were needed more than ever. There’s the joking about drone strikes and the lies and the sense of statesmanship given to people who say that we don’t kill civilians with drones, who just out-and-out lie about it.

We’ve got to use the Code Pink tactics of interrupting these people, of direct action, of civil disobedience, of being out there with our pink handcuffs to try and arrest them and hold them accountable for war crimes. But let me just reiterate: in an election period, when our natural allies would be independents and Democrats, we’ll lose all the Democrats. People on the left, the progressives, will be very reluctant to criticise Obama. 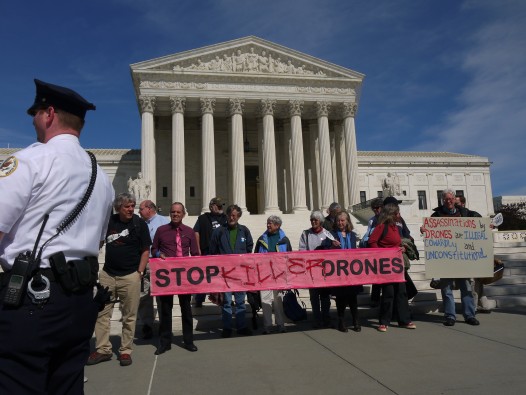 Q: How do you think the recent Washington drones summit went? And why has it taken 11 years of bombing to get a conference like this in Washington?

MB: It’s a good question, and I would say a criticism of the entire anti-war movement here in the United States. I looked around and I thought, ‘It’s pathetic, why have we taken so long to get together on this?’ Sure we’ve had a lot of meetings and outside conferences and endless protests about the wars in Iraq and Afghanistan.

We’ve got to use the Code Pink tactics of interrupting these people, of direct action, of civil disobedience, of being out there with our pink handcuffs to try and arrest them and hold them accountable for war crimes.’

But we’ve kind of ignored the fact that our government is way ahead of us and while we’re focusing on the covert wars and the boots on the ground, our soldiers dying, they’re transforming the way they’re waging war and taking it out of the public view, spilling over into Pakistan and Yemen and Somalia, and building up drone bases in Kuwait and Qatar and Ethiopia and Seychelles and Australia and Turkey, and on and on. So they’re not just one step ahead of us, they’re 1,000 steps ahead of us. And we should have had this conference a long time ago.

The only thing that we’re a bit ahead of the curve on is on the proliferation of drones here at home. That since the regulations haven’t yet been written by the Federal Aviation Administration, we have a chance to influence those. So that’s the one thing I feel somewhat good about.

Q: And what’s your answer to that? Isn’t it just another piece of technology? What’s different about drones? 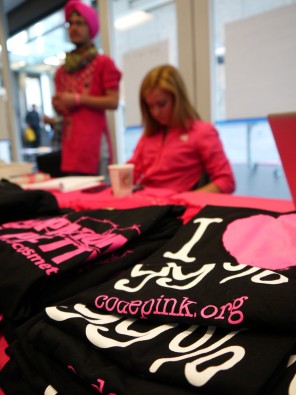 MB: The difference with drones is that drones make these wars possible. From being able to wage them without even having to go to Congress, because according to the Administration’s definition of war, war is when you put your own soldiers’ lives at risk. And since we’re not doing that with drones, it’s not war, it doesn’t have to be agreed in Congress. It doesn’t even have to be open to the American people. It can be carried out in total secrecy.

And as some people said in the conference, drones are the only way to wage some of these battles because of the issue of national sovereignty. You could never get away with the boots on the ground. And because, for example with the terrain in Yemen, you wouldn’t be able to do it any other way than with drones.

So I think that drones are a special piece of technology that make extending these – I wouldn’t call them wars, they’re violent interventions – make them possible to do. So we do have to focus on the technology, but within the context of war.

According to the Administration, war is when you put your own soldiers’ lives at risk. And since we’re not doing that with drones, it’s not war, it doesn’t have to be agreed in Congress. It doesn’t even have to be open to the American people.’

Q: You’re now planning for a group trip to Pakistan. A critic at the recent conference said that people in the room were ‘naïve’, that their understanding of Pakistan was over-simplified and that there were far bigger issues there that were more important.

MB: I think there’s a certain truth to the fact that most of the people in the room were very unaware of the complexity of the situation in Pakistan. And so their own agenda is a pretty simple one. ‘I don’t want my government killing people without due process, whether Americans or people in other parts of the world. And I don’t think that makes me safer at home. I don’t think it makes the world a safer place.’

Pakistanis have their own complex internal situation, but they’re going to have to deal with it and our interference is not helping. So as Americans, to go in there with a simple message and say, ‘We don’t want our government violating your sovereignty, it is up to you to decide how to deal with your issues of Taliban and al Qaeda and terrorism and fundamentalism, and it’s up to us to make our government obey international law.’

So I think we stick to a pretty simple message. And say we don’t want to get involved in your internal affairs, they’re far too complex for us to even think that we can comprehend them… We just want to step aside and let you figure it out.

This is an edited version of a longer interview.