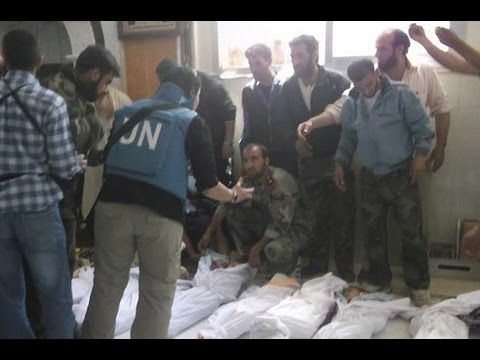 Syria’s military bombarded the town of Houla in Homs province on Saturday, killing 90 persons, including dozens of children, according to opposition sources.

The Baath regime in Syria has survived despite 14 months of popular rallies, demonstrations and revolts because at least half of Syrians, especially in the big cities such as Aleppo and the capital, Damascus, have been more afraid of a Muslim fundamentalist takeover than of a continued one-party dictatorship.

The harsh crackdowns of the security forces on peaceful civilian rallies and the deployment of snipers against them has changed some minds, and the government attacks on protesting university students in Aleppo recently provoked significant demonstrations in that city.

The Baath military typically only deploys artillery against city quarters dominated by defectors and armed men of the Syrian Free Army, and my guess is that they were attempting to retake Houla from the SFA. Artillery barrages allow them to avoid taking high casualties in hard hand to hand fighting in narrow city alleyways.

But artillery is a blunt weapon, and if it hits apartment buildings full of non-combatants, it can cause a massacre. Seems to me that bombarding an inhabited city quarter is almost always a war crime, since civilian casualties are eminently foreseeable.

The outcome in Houla is so horrific that it may turn the stomachs of the remaining Syrians who are on the fence, and produce a new backlash against the regime. The revolution in Syria is a contest of wills between the regime on the one hand, and on the other the revolutionaries (who have a civil and a military wing that seldom agree). The revolutionaries have remained steadfast in the face of massive brutality, for over a year. Their will seems strong. The regime seems to be popular in fewer and fewer places. The will of all but its devoted cadres is being shaken.

The inner core of the Baath Party is incapable of feeling remorse or taking responsibility. But it depends on the support or at least acquiescence of millions of ordinary people, who will likely be touched by Houla. Just as the US public began turning against the Vietnam War because of events like the My Lai massacre, so Houla could be a turning point.

Aljazeera English has video (warning, it is graphic and disturbing).

The Syrian Free Army then took UN observers to Houla to see the carnage (again this video is disturbing):

Likewise, Houla could have an impact at the UN Security Council. It seems increasingly clear that the Kofi Annan plan of filling the country with UN observers to encourage adherence to a cease fire is a dead letter. The question at the UN has to be, “what next?”

Those who ridicule the idea of an international responsibility to protect as a mere stalking horse of neo-imperialism will please have the decency at least to denounce the Baath regime for this bloodbath.