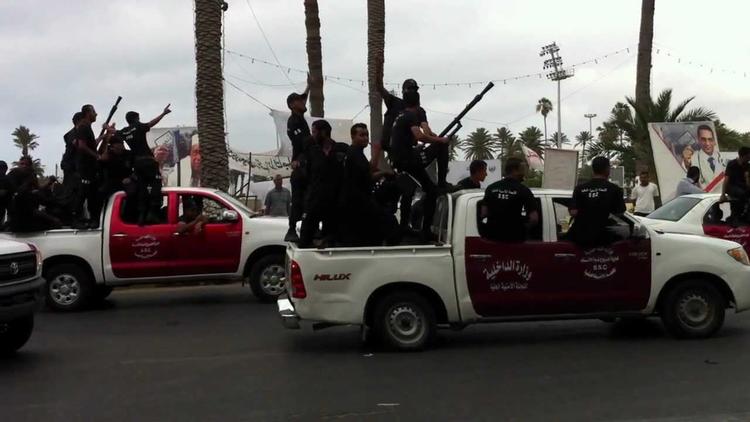 I spent May 27 through June 3 in Libya, and flew out of Tripoli airport to Cairo a day before a small Tarhouna militia came there to demonstrate against the disappearance of its leader. Despite that close call, I came back optimistic about Libya over-all. The Tarhouna demonstration was dealt with efficiently by the new Libyan army, which took control of the airport weeks ago, and there is every reason to believe that it will reopen shortly. When I flew in and out of the Tripoli airport, there were no militiamen there, just regular army and police (who have distinctive red-marked vehicles). There are also now regular flights from Cairo, e.g., to provincial cities like Misrata.

There is a kind of black legend about Libya, that it has become a failed state and is a mess, that there are armed militiamen everywhere, that everybody is a secessionist, that the transitional government is not doing anything, that people of subsaharan African heritage are bothered in the streets, etc., etc. The black legend is promoted in part by remnants of the Qaddafi regime and his admirers in the West, in part by overly anxious middle class Libyans navigating an admittedly difficult transition, in part by media editors looking for a dramatic story.

Henry Kissinger, in his recent op-ed against intervention in Syria, listed the erasure of the Libyan state as an argument against such interventions. I read the allegation with disbelief. Libya is not like Somalia! It isn’t even like Yemen. (The Libyans I talked to about Yemen sympathized with the country’s problems but were astonished to hear that some Western observers looked a their situations as similar!)

So imagine my surprise on visits to Benghazi, Misrata and Tripoli, to find that there were no militiamen to be seen, that most things were functioning normally, that there were police at traffic intersections, that there were children’s carnivals open till late, families out, that jewelry shops were open till 8 pm, that Arabs and Africans were working side by side, and that people were proud in Benghazi of having demonstrated against calls for decentralizing the country.

As someone who has lived in conflict situations, I take as a very serious gauge of security whether shops are open and how late they stay open. Jewelry shops in particular are easily looted, and the loot is light and easy to fence. But in Tripoli there was loads of gold in rows of jewelry shops, along with clothing stores newly stocked with Italian fashions. Shopkeepers I interviewed were fully stocked, confident and glad to finally be rid of Qaddafi’s erratic governance, under which they were never sure if they would make a profit because policies changed frequently.

And here is a little set of carnival rides near Martyr’s Square in the capital:

Life is pretty normal. I talked to a Libyan of African heritage who had worked in Germany 14 years and recently had returned. He said he is *much* happier in Libya, even though he is working two jobs (one of them teaching Arabic). A friend of mine is organizing a music festival in the capital. People are gearing up for the election of the National Congress, which will draft a new constitution and gradually create a new government.

Cities unhappy with the foot-dragging of the transitional national government have simply staged their own municipal elections. Benghazi just held its successfully, and Misrata did this months ago. I met the husband of a newly-minted female city council member in Benghazi; she was the number one vote-getter among the candidates that ran, and may chair the council. The municipal governments have the legitimacy of the ballot box and are beginning to address local problems.

So if you aren’t in danger of being mugged at night in Tripoli or Benghazi, are there other problems? Sure, loads of them. While I was there the dock workers went on strike at Tripoli to complain about the poor management of the port. Then, in an oil state, money flows to municipalities rather than cities raising money through taxes, and the transitional government still isn’t very good about remitting the money. There is a human rights situation that needs to be addressed in the small town of Tawergha, the militias of which committed war crimes on behalf of Gaddafi; Tawergha has been cleared of its inhabitants, and they need to be allowed to return to their homes. And while security on the whole is fine for individuals in the big northern cities, it probably is still not entirely satisfactory for new investors bringing in expensive equipment to places like Benghazi (though BP has decided to get back into Libya). You have occasional moments of militia protest like the one yesterday at the airport in Tripoli.

But I was struck at the air of normality everywhere I went, and by the obvious comfort people had in circulating, selling and going about their lives. There are no bombings, there is no civil war, there is no serious secessionism. One man told me that the biggest change is that people are no longer afraid. They had been captive of the revolutionary committees and the secret police. And that end of political fear, the Libyans I talked to insisted, made the uncertainties of this transitional period all worthwhile.

I went to Libya expecting to find people nervous about going out, expecting to find a lot of shops shuttered, and expecting to be stopped at militia checkpoints (which was common in Beirut in the late 1970s when I lived there in the first years of the Civil War). Maybe such things exist in smaller provincial cities that I didn’t visit, like Gadames in the South. I don’t know. In the urban north, I found a society actively reconstructing itself where people clearly were going about their ordinary lives, where stores were open and people were sitting in sidewalk cafes, where there were no militiamen on the streets, no checkpoints, and where there were actually traffic cops directing traffic.

So while I wouldn’t want to minimize what difficulties remain, and while I am aware that a week on the ground won’t reveal all the society’s problems, I can say with certainty that the image found in the Western press of the place is far more negative than what I saw with my own eyes and what I heard from locals in Arabic-language conversations.

And I can say categorically that Henry Kissinger is wrong about Libya.