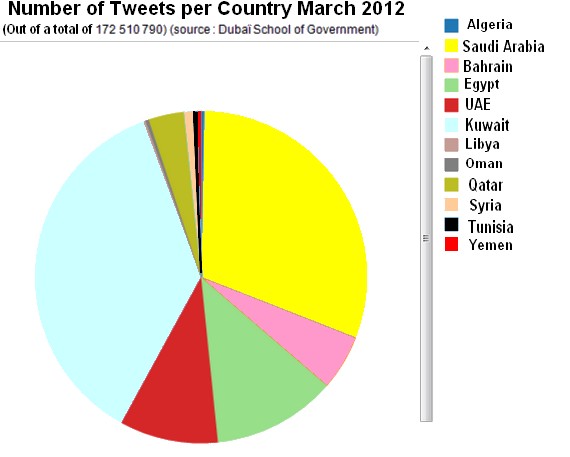 Jeune Afrique (Young Africa), has a piece on social media in the Arab world.

It shows that by volume of tweets, Twitter in the Middle East is dominated by the Gulf oil states, not by the mostly more populous countries of the Arab Spring. The giants of tweeting are Saudi Arabia and Kuwait, with the United Arab Emirates, and even Qatar (citizen population 250,000) also significant. Of the Arab Spring societies that have seen social unrest and either changes at the top or attempted changes at the top, only Bahrain (a Gulf oil state) and Egypt (the largest Arab state by far) are in the same league with some of the tiny Gulf states. Since the rebellious societies, with the exception of Bahrain, are much, much more populous, the dominance of the Gulf states in number of tweets is proportionally even greater than the graph suggests.

The graphs aren’t exactly commensurate. With Twitter, the graph counts tweets, whereas with Facebook, they are looking at *users*, of which most countries have more than do the Gulf Cooperation Council countries. Still, presumably 11 million Tunisians could, if they wanted to, tweet more than the 2.7 million Kuwaitis.

So there seems to be something to the distinction, Gulf=Twitter, populous countries=Facebook.