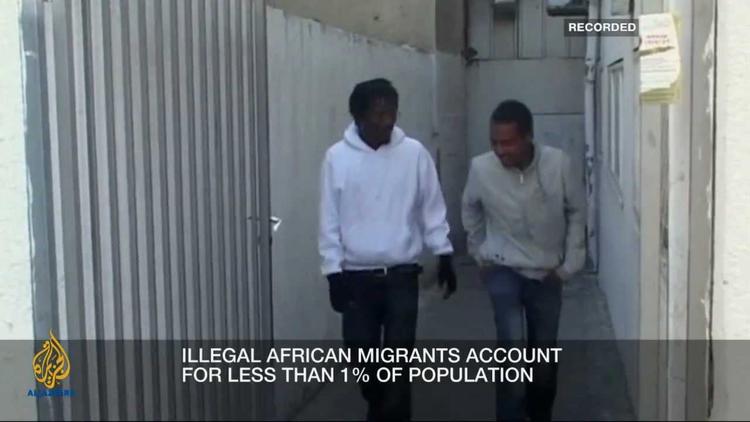 An Israeli law allowing the arrest and detention of illegal immigrants for up to 3 years without trial has been denounced as contrary to basic human rights by Human Rights Watch.

Israel has about 60,000 illegal immigrants from Africa, nearly 1% of the population. Some are from Darfur and South Sudan, and came because they heard that Israel is supporting their cause on human rights grounds. Others are simply looking for a job in one of the region’s most dynamic economies.

Israeli government strategy is to round up Africans in Israel and to hold them in detention centers before expelling them.

Aljazeera English reports on US State Department criticisms that Israel provides no services to asylum-seekers.

While in a recent poll a majority of Jewish Israelis were comfortable with Thai, Filipino or non-Jewish Eastern European immigrants in Israel, some 51% called African illegal immigrants a cancer on society; virtually none of the respondents said they lived near Africans. And, only 19% of Arab Israelis polled had such negative feelings toward the African immigrants.

It is hard to escape some unsavory conclusions here. One is that Israeli championing of human rights in East Africa is somewhat instrumental and that practical help to Fur people from Darfur, such as giving them asylum and jobs, is not on offer even while pro-Israel groups lead campaigns to criticize the Sudanese government. That is, all states have the right to control their borders and to deport illegal immigrants, but vocal championing of oppressed ethnic groups implies a willingness to establish basic procedures for acceptance of asylum-seekers from among them.

Another is that a lot of Israelis have more problems with African immigrants than with European or Asian ones.

The issue has come to a head recently, with a riot against illegal immigrants from Africa by Jews in Tel Aviv, and a demonstration on Saturday in the same city by Africans demanding rights.

Israel’s government is determined to round up and deport the estimated 1500 Africans from South Sudan, on the grounds that that country is now safe for them, since it seceded from Sudan. In fact, South Sudan is a mess.

But beyond the humanitarian and race issues raised by the Likud Party’s policy toward African immigrants, the problem is larger. The whole idea of an ethnically-based country in an age of globalization is under severe pressure.

The Israeli Right Wing constantly demands that the country be recognized as a ‘Jewish state.’ But 20% of its citizens are Palestinian-Israelis. In addition, some 300,000 citizens are acknowledged in the census as not Jewish (many of them Eastern European immigrants of Eastern Orthodox Christian heritage), and many demographers think that the number of non-Jews is actually much greater. The Grand Rabbinate has repeatedly refused to recognize these persons, whose mothers were not Jewish, as Jews. Guest workers from Thailand and the Philippines have been brought in to work on Israeli farms or serve as nannies. (Such immigrants have come in large numbers to Lebanon and the Gulf oil countries, as well).

In short, Israel is a multicultural society that refuses to admit to itself that it is multicultural, because such an admission flies in the face of Zionist aspirations for a monochrome Jewish state. Demography and globalization, however, tell against this nineteenth-century romantic-nationalist vision, which confuses nation-hood with an ethnic state. In fact, there are no nations of the sort early Zionist thinkers imagined. The French include Bretons, Alsatians, people of Provencale, Basques, and now substantial numbers of Arabs and Africans, not to mention descendants of a million Italian workers who came in the late nineteenth century. Israelis are similarly diverse, and even more diverse if the de facto annexation of the Palestinian West Bank were recognized, in which case Israel has a population of 10 million, not 7.5 million, and the Palestinian-Israelis are 3.5 million or 35%, not merely a fifth. That is, the actually-existing Israel is more like Malaysia than it is like Armenia. In a self-avowedly multicultural Israel, the Sudanese and other immigrants would not be a conceptual problem.