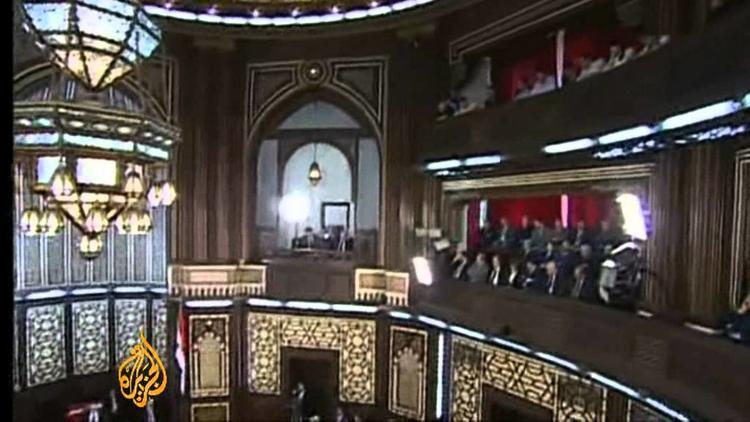 Syrian dictator Bashar al-Assad said Sunday that the 14-month-old attempted revolution in his country is being instigated by outside forces. He defended the bloody crackdown on the rebellion by the regime, saying that when a doctor operates on an eye, we don’t complain about all the blood but rather thank him for saving the victim’s sight (al-Assad was an ophthalmologist). So instead of ‘the Butcher of Damascus’ he is angling for the epithet, “the surgeon of Damascus.”

He went on to blame the protesters and rebels for the killings at the central Syrian town of Houla two Fridays ago, saying it was the work of ‘monsters’.

In contrast, a defecting Air Force officer, Major Jihad Raslan, has told the Western press that he saw Syrian army soldiers give cover to the pro-regime Shabiha thugs who carried much of the massacre in the city, which is a stronghold of opposition to al-Assad. Raslan’s account is corroborated by satellite photos published by the BBC last week.

Refreshingly, an independent Russian observer, Dr. Aleksandr Shumilin, told a Moscow radio station that al-Assad’s speech, most of which took place in fantasy-land of his creation, is a very bad sign. It is so unrealistic that it may presage an intensification of the conflict. Russian President Vladimir Putin is blocking a UNSC resolution permitting outside intervention in Syria, but some of his own Middle East experts see al-Assad as detached from reality and as provoking the violence (translation courtesy the USG Open Source Center):

(Presenter) Syrian President Bashar al-Asad has blamed foreign forces for the armed conflict in the country. Addressing the new parliament, he said that Syria was being pushed towards war. (Passage omitted: excerpt from al-Asad’s speech)

By his speech in parliament, al-Asad spelt the end of political process of settlement of the internal Syrian conflict, director of the Centre for the Analysis of Middle East Conflicts Aleksandr Shumilin believes.

(Shumilin, voice recording) It is clear that this sort of unreasonable assessment of the events will only aggravate the situation, and will, incidentally, serve to justify the opposition’s move to tougher measures, military measures of putting pressure on the regime. They may now start to unite and move towards military plans of in effect ousting the regime. In these efforts, they may well get the support of the Arab countries – not only of Saudi Arabia and Qatar, which are currently at the forefront of putting pressure on Syria, but also the majority of member states of the Arab League.

(Presenter) Let me remind you that the armed confrontation between government forces and the opponents of al-Asad’s regime has been ongoing for over a year now. According to human rights campaigners, 13,000 people have already lost their lives in the conflict.’