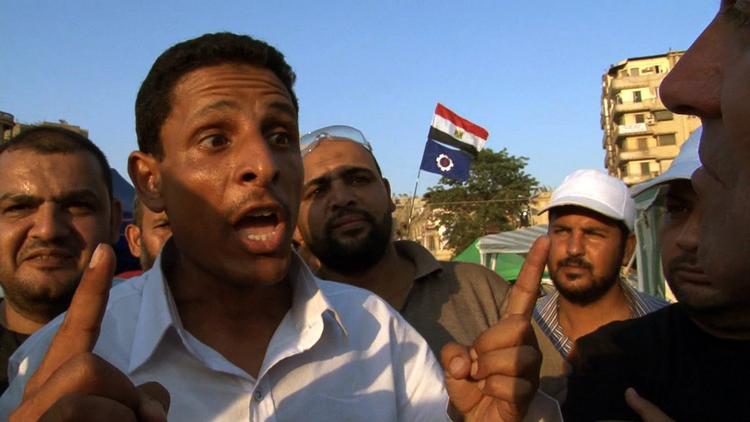 An enormous crowd of tens of thousands, the biggest this week, gathered in Tahrir Square in downtown Cairo on Friday, especially as the torrid sun set. These protesters are mostly fundamentalist Muslims, supporters of the Muslim Brotherhood, though some left and liberal youth groups joined them. They favor candidate Muhammad Mursi in the presidential race, the results of which should be finally announced this weekend.

The only good news was that the short statements of Mursi and of the Supreme Council of the Armed Forces were sometimes conciliatory. Mursi rejected the dissolution of parliament and the issuance by the military of martial law amendments to the constitution. But he did not again claim to have won the presidency, and he agreed to abide by the official results of the election. The military did not try to stop the big demonstration at Tahrir Sqaure (and the smaller ones around the country), but warned that they must remain orderly.

Khairat al-Shater, the treasurer of the Muslim Brotherhood, affirmed that behind-the-scenes meetings have been taking place between the officer corps and the Brotherhood leadership, though he complains that the military is still arrogant and not quite ready to compromise much.

CBS has a video report:

“April 6” and other leftist organizations have been demanding that the military go back to their barracks since at least March of 2011, and were often isolated in this demand and considered perhaps a little kooky for thinking such a thing was even possible. Especially once it won the parliamentary elections in December of 2011, the Muslim Brotherhood abandoned the young leftists and essentially did a deal with the military that gave the Brotherhood the legislature and let the military maintain their grip on the executive.

Many in the Brotherhood now admit that they made a huge error in abandoning their leftist allies. The military, believing that it had divided the opposition and marginalized the leftist youths, dissolved the Brotherhood-dominated parliament last week, and by then there was nothing anyone could do about it. The military then issued a set of what were essentially constitutional amendments, by fiat, which stripped the elected civilian president of some of his powers.

The Brotherhood crowds in Tahrir Square on Friday were chanting that the military government must fall, as the leftists had last year. But by now the officers have entrenched themselves and it may be too late.

A handful of protesters came dressed in burial shrouds, and announced their readiness for martyrdom.

The Deputy Minister of the Interior, Abdul Latif al-Budaini, came to Tahrir on Friday and warned that Gen. Ahmad Shafiq, the Establishment candidate for president, wanted to reestablish the secret police (Amn al-Dawlah) and restore the rule of the cronies of deposed dictator Hosni Mubarak. Al-Budaini said that remnants of Mubarak’s National Democratic Party were deliberately fomenting insecurity in the country to justify bringing Shafiq to power and the restoration of the secret police. The Ministry of the Interior in Egypt is the main security agency and had been in charge of arbitrary arrest and torture in the old regime. Al-Budaini had been dismissed by his former boss Habib Adly (now in prison) for refusing to torture prisoners, but was reinstated by the courts. Al-Budaini is afraid that Shafiq wants to bring back Adly’s ugly practices. He says he wants to see the Ministry of the Interior cleaned up, but would need a revolutionary ally, and he considers Mursi such a man.

Akhbar an-Nahar da reports that the mass of the working class and the poor are sitting out the struggle among the Brotherhood, the military, and the leftists because they don’t believe any of them will really improve their lives or standard of living. They say they lack enough electricity, potable water, and other resources. They say that when they approached the members of
parliament to get improved services, they were rebuffed and told that the members of parliament are too busy with parliamentary affairs to do anything about their problems.