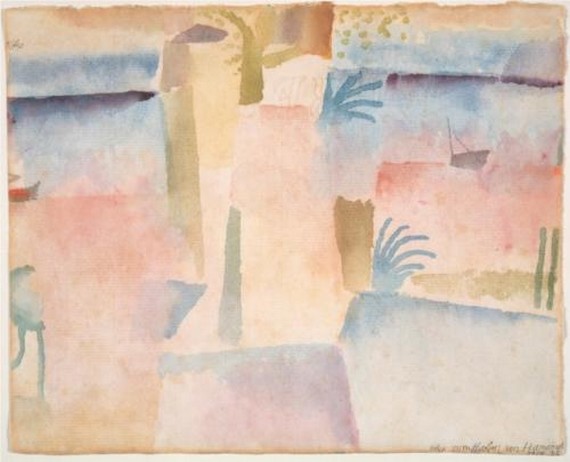 Paul Klee, the Swiss-German modernist painter, experienced epiphanies during the ‘student trip’ he took with two other young artists to Tunisia in 1914. It was there that he, deeply influenced by the color and the quality of the light (which other European artists have remarked on), he “began his path toward abstraction,” as the brochure of the NYC Metropolitan Museum notes.

Of Hamamet, now a major tourist resort city, Klee wrote according to June Taboroff, “The city is magnificent,” related Klee, “right by the sea, full of bends and sharp corners. Now and then I get a look at the ramparts! In the streets more women are to be seen than in Tunis…. The reeds and bushes provide a beautiful rhythm of patches. Superb gardens in the vicinity. Giant cactuses form walls. A path with cactuses… Painted a good deal and sauntered around.”

There is a real sense in which Klee became an artist in Tunisia, gaining spiritual confidence, especially from the old Islamic center of Kairouan, and learning from the encompassing night and the limpid daylight how to see things without being trapped by their forms. To that extent, Tunisia gave us Klee and a stream of German modernism. In 1920 Klee was called to teach at Bauhaus.