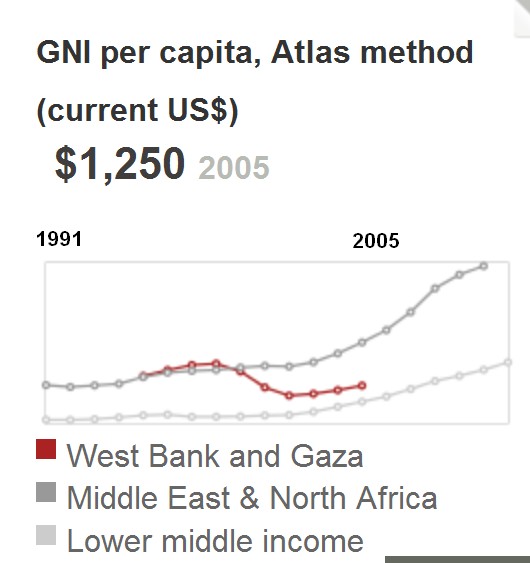 Mitt Romney, a privileged white man worth a quarter of a billion dollars who has sheltered his money from taxes in Bermuda, the Cayman Islands and Switzerland, and who never misses a square meal, stooped to a new obscene low in blaming the victim on Monday by slamming the Palestinians for not being richer. Palestinian politician Saeb Erekat characterized Romney’s remarks as “racist,” but even that was charitable. Evil, is more like it.

Reuters reports that Romney told his audience at a $50,000 a plate dinner,

“As you come here and you see the GDP per capita, for instance, in Israel which is about $21,000 dollars, and compare that with the GDP per capita just across the areas managed by the Palestinian authority, which is more like $10,000 per capita, you notice such a dramatically stark difference in economic vitality,” Romney said.

Romney didn’t mention a little thing like US direct aid to Israel of over $100 billion and indirect aid to the tune of tens or hundreds of billions more.

It is telling that Romney has no idea the economic straits to which the Palestinians have been reduced by vampire-like right wing Israeli policies toward them. (A majority of Israelis favors withdrawal from most of the West Bank if a peace settlement were reached with the Palestinians; Over a third would even evacuate large settlement blocs like Ariel. But the right wing wants all of the West Bank as Israeli territory, though they can’t figure out what to do with the 2.5 million Palestinians to whom it belongs; or rather, they can’t say openly what their ultimate resolution would be).

Although the West Bank has seen economic growth since about 2007, for most of the past 20 years Palestinians actually were being driven deeper into poverty, and Gaza is still below early 1990s levels because of the illegal and evil Israeli blockade. It was the Oslo Peace Accords that caused the to lose ground, since the Israelis used it as a cover to mount a massive colonization drive, and when the Palestinians unsurprisingly protested, they were sanctioned.

Citing the book “The Wealth and Poverty of Nations,” Romney detailed his interpretation of author David Landes’ thesis.

Palestinian poverty has nothing whatsoever to do with Palestinian “culture” or “character.” It has everything to do with their being stateless and the theft from the Palestinians of their land, water and resources by the international Zionist movement, with the support of Britain, the United States, France and Russia and in direct contravention of British and League of Nations commitments to the Palestinians of moving to statehood and not being disadvantaged by the Balfour project of establishing a small ‘national home’ for those few European Jews who then wanted to live in British Mandate Palestine.

Stateless people have no firm property or human rights because there is no state to guarantee them. Their property rights are routinely revoked or not recognized, and the courts to which they could go for redress mostly view them as illegal aliens who don’t deserve justice.

Romney should expand his reading to Hernando de Soto on why so many people in the global South find it difficult to secure their property rights, and why this uncertainty as to whether they really own what they think they do keeps them poor.

Here is what the territorial history of the Palestinians has looked like since the Europeans rode roughshod over them during WW I: 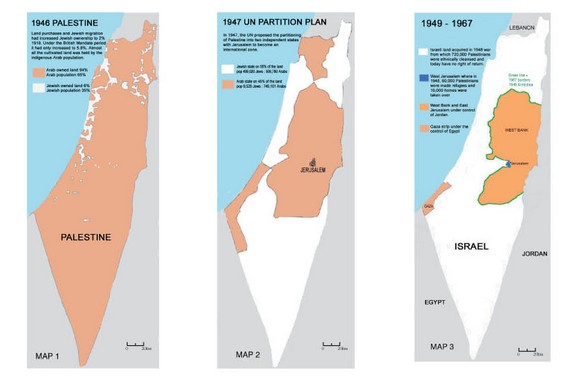 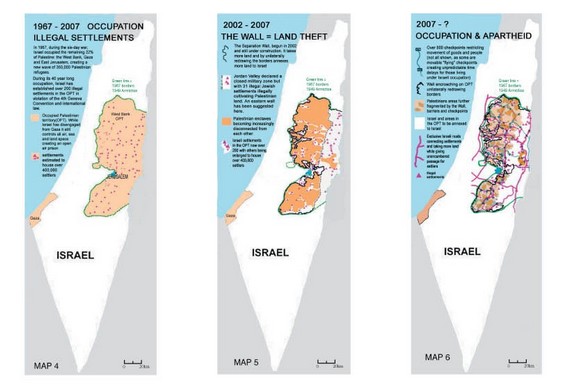 As late as 1939, the British scheduled Palestine for independent statehood. The ethnic cleansing drive of the violent organizations of the Yishuv or Jewish settlement community, some 500,000 strong after WW II, in 1948 drove 700,000 of the over 1 million Palestinians out of their homes into refugee camps in the West Bank, Gaza, Jordan, Syria and Lebanon, where they were ever afterwards stuck in Palestinian Jail. The Yishuv declared its violently seized territory to be “Israel,” usurped what would now be trillions of dollars worth of Palestinian property with no recompense, and locked the Palestinians permanently out of their own land.

Nascent Israel did not actually face an attack in 1948 from 100 million Arabs. They did face desultory resistance from a couple of weak neighbors. They had a deal with Jordan, which just wanted the West Bank, which anyway hadn’t been awarded to Israel in the UN General Assembly plan (itself lacking in legal force). They did face an invasion of Negev from Egypt, but most of the Palestinians ethnically cleansed were not combatants or working with the Egyptians. It wasn’t legal or necessary to permanently exile all the Palestinian non-combatants who were chased out or fled.

Most of Palestinians have ever since remained stateless, many having no right to work, own property or operate legal businesses, and few guaranteed such rights by a state. Only in Jordan were they given citizenship, but even there it has been taken back away from thousands, and they are clearly marked as second class citizens. The onus is on Israel, the original perpetrator, to offer redress to the Palestinians of some sort and see to it that they don’t remain in an odd form of 21st century legal limbo that resembles slavery in its lack of basic human rights.

Having chased them out of their country in 1948, the Israelis then came after the Palestinians in Gaza and the West Bank in 1967 and have ever since made their lives miserable, denying them the rights of citizens in a state, blockading them from time to time, keeping those in camps in camps, revoking their property rights, and stealing their water by digging deep wells that lowered aquifer levels and made Palestinian wells go dry. They have encircled Palestinians with Apartheid roads on which Palestinians cannot drive, created cantons, and hemmed them in with checkpoints that have turned 15 minute journeys into all day affairs.

In Gaza, Israel has violated the Hague Convention of 1907 and the Geneva Convention of 1949 on the treatment of occupied populations by imposing on the civilian non-combatants of the place a tight economic blockade. 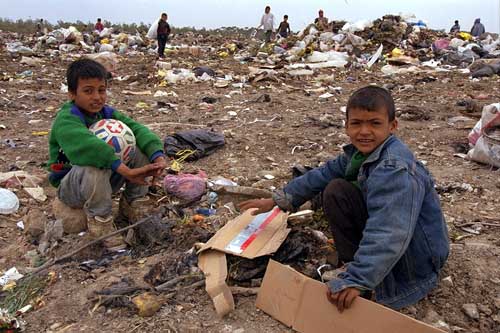 All this rather interferes with economic growth.

In Lebanon, they can’t get travel documents, can’t own property, and mostly can’t work legally, because the Christians don’t want an extra 400,000 Sunni citizens upsetting the country’s delicate religious balance. Palestinian camps are lawless because the host country mostly doesn’t police them. People are preyed on by gangs from time to time.

I visited the Palestinian camp of Nahr el-Bared near Tripoli, Lebanon, a couple of years ago. I urge Mr. Romney to go talk to people there. I met one old man who told me the story of how Zionists came to his mother’s apartment in Haifa in 1948 and kicked them out, occupying it. He and his mother fled north and got caught on the Lebanese side of the border. They lingered there in a tent for a year. Then the UN transported them by train to near Tripoli and dumped them in a camp, where he has been ever since. His wife was ill and had no money for health care. They were turned into essentially illegal aliens by the Israeli ethnic cleansing. In 2007 a small gang of 50 people in the camp started committing bank robberies in nearby Tripoli, and declared themselves radical fundamentalists. Dick Cheney pressured the Lebanese government to do something about this “al-Qaeda” cell, and the Lebanese army assaulted the whole camp, destroying it and making that man and 70,000 other Palestinians homeless refugees all over again. They were living in UN temporary quarters when I visited in 2010.

The 70,000 Palestinians in Nahr el-Bared hadn’t done anything. They just were in the way of an attack on 50 gangsters amongst them. The US, which insisted on this action, has done nothing significant for the continually displaced population. 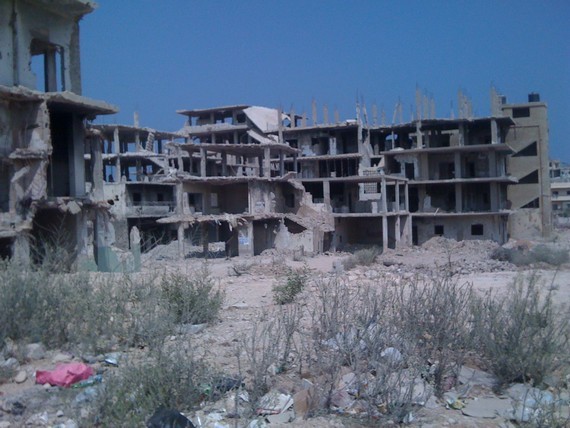 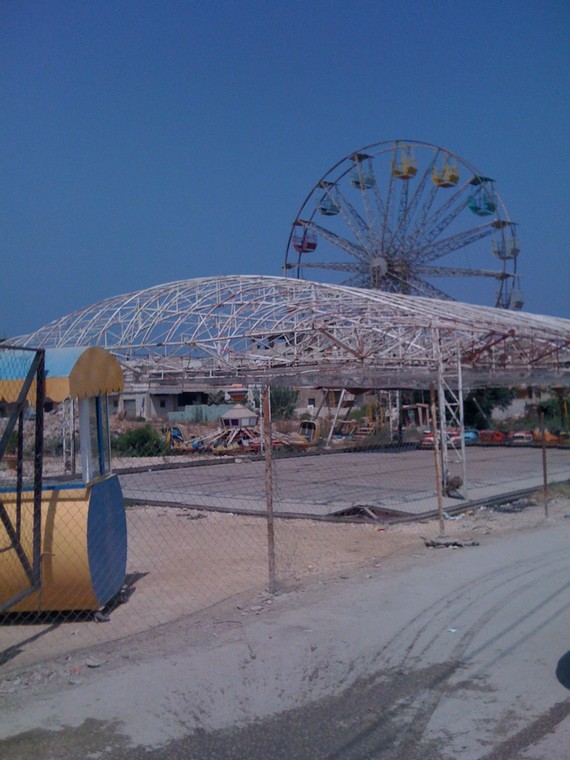 Because Romney is taking the side of the billionaires in the far right wing Likud Party, he is an accomplice after the fact to the ethnic cleansing and continued expropriation of the Palestinians, whom he is helping keep stateless and without firm rights, i.e. in poverty. And yes, Barack Obama and the whole apparatus of the US government are complicit in continued victimization of the Palestinians; but I haven’t heard Obama say that the Palestinians’ problems are the fault of their “culture.”

I doubt Mr. Romney is capable of reflection or shame, but this performance in Jerusalem is an occasion for them.