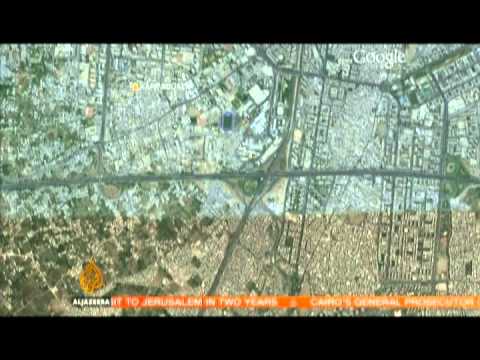 It is significant, but not decisive, that fighting raged for a second day in the Syrian capital of Damascus Monday. The southern district of Tadamun was especially affected, though there were reports of clashes even in Midan, right down town.

There also continued to be demonstrations and clashes around the country, which left 67 dead according to opposition sources.

In the four successful attempts at deposing the dictator from below in the Arab world, crowd action and popular mobilization in the capital was decisive. The capital is key because it is typically the site of the presidential palace, the ministry of interior (i.e. secret police), and the HQ of the ruling party in the one-party state. If very large crowds gather and move toward the presidential palace, it is difficult for the military to intervene without risking the bad publicity of a massacre.

But crowd action in the capital is only part of the strategy for deposing a dictator. In Egypt and Tunisia, at least, the rest of the elite decided that the dictator was not worth all that trouble, and put him on an aircraft to somewhere else.

This element, of the elite’s willingness ultimately to throw the dictator under the bus, that is missing from Syria. The inner circle of the Baath Party is dominated by the Alawite Shiite sect. Alawites comprise 80% of the officers in the Republican Guard. These Shiites are not ideologically motivated. They are mostly secular people and at least had strong ties to Sunnis, as well. But their prosperity has depended on being regime insiders, and without a Baath Party ruling Syria, the fate of the Alawites has a big question mark over it.

Syria therefore much more resembles Libya than it does Egypt and Tunisia. In Libya, the regime did not fall until there was a mass uprising in the capital. But this uprising was made possible in some important part by the destruction of Qaddafi’s armored divisions. The fighters got rocket propelled grenades and other medium arms from Qatar and possibly France, and they knew they could prevail if they did not have to face tanks, artillery and rockets. NATO’s destruction of so much of Qaddafi’s armored capability built confidence among the revolutionaries.

So the fighting in Damascus may not be a turning point, or at least it may not be the turning point. The fighters may be surrounded and destroyed by the Alawite-dominated Republican Guard. The high Baathist elite may decide they need to make a stand rather than throwing Bashar al-Assad overboard. The regime has 5,000 tanks and lots of artillery, and this continued large arms capability may deter Damascus from rising up en masse in the way that Libya’s Tripoli did. At least, you can’t take it for granted that the deterrence will fail.

People in Damascus in telephone calls to loved ones abroad reported hearing gunfire and explosions in the distance, and not being able to sleep at night.

The geography of yesterday’s fighting in the capital is explained by Aljazeera English:

To have, as AFP Arabic reports, tank fire in Midan is extraordinary, and a real change from last year, when the capital remained quiet while the smaller provincial cities revolted.

But the fighters in Tadamun may actually be in trouble. Tanks have been brought into the districts, blocking roads, and cutting off escape routes, even as snipers have been deployed on rooftops. Guerrillas should never put themselves in a position where they have to stand and fight, and can’t melt away before superior conventional forces.