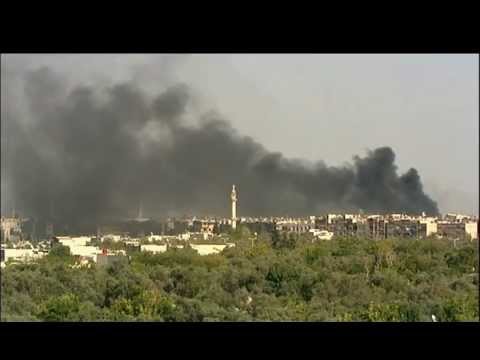 When I was interviewed by the BBC last week about rebel advances in Damascus, I cautioned that putting some armed bands in some neighborhoods would not result in a revolution. Nor did even a big bombing of security officials. I said that that a significant proportion of the population of the capital would have to rise up in order for the regime to fall. The rising did not take place (people were still terrified, and thousands fled). In subsequent days, the Baath government riposted, taking back the downtown Midan and other areas, and not hesitating to use its massive firepower advantage, even if it meant high non-combantant casualties.

Then the rebels launched their Aleppo campaign, taking over whole neighborhoods of the country’s largest city, in the north. This advance was probably made possible in part because the regime had pulled troops to the capital to meet the challenge there. But now that Damascus has been largely regained, the government of Bashar al-Assad has turned its sights on Aleppo.

One Arabic report has it that that the al-Assad regime has removed hundreds of Sunni officers from responsibilities for safeguarding chemical weapons stores and commanding helicopter gunships. They are giving these sensitive responsibilities to officers from the minority Alawite Shiite community instead, which dominates the upper echelons of the Baath government and military.

The defection of the Tlass (Talas) family, formerly pillars of Sunni support for the regime, may have driven this change if it is true. Manaf Tlass surfaced Tuesday to call on Syrians to rise up against their government.

In a remarkable escalation, the regime on Tuesday and early Wednesday subjected Aleppo to bombing raids by MIGs.

ITN has a chilling video report with footage from Aleppo:

The determination of a terrified and brutal minority regime to reassert itself is clear in the appointments made by President al-Assad to replace his assassinated officials. As Joshua Landis explains, they are all hawks.

On Tuesday evening into Wednesday, ground forces subjected the Tal district of Aleppo to heavy artillery bombardment. The 216th Mechanized Brigade directed fire on the district of 100,000 people about 5 miles north of Aleppo proper. Helicopter gunships were also deployed against the rebels.

Elsewhere in the north, there was back and forth fighting by rebels and regime loyalists in Deir al-Zor.

The Syrian regime is armed to the teeth, with 5,000 tanks, thousands of artillery pieces, and a significant air force. If it decides to commit these massive military resources to the fight with the rebels, it may well be able to crush them in the short term. But its problem is to retain the loyalty of enough of the population and the troops that stem from them to continue to operate the machinery of war against its own urban population.