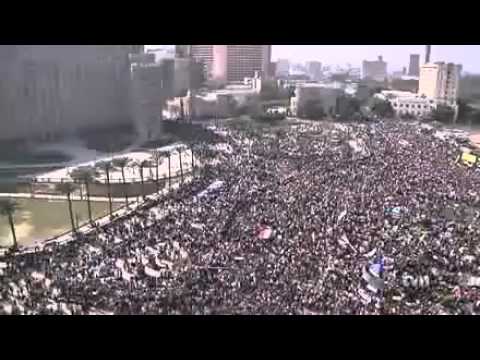 Paul Ryan knows nothing about the world or foreign affairs. I presume he may have been abroad at some point somewhere. I don’t know. As is usual in American politics, however, cavernous ignorance is no bar to holding forth, if it is not in fact a qualification. After all, ignorance is compatible with untainted national chauvinism (he would say patriotism), whereas if you actually know something it is harder mindlessly to wave the flag.

Paul Ryan has been attacking President Obama’s foreign policy as weak and resembling that of Jimmy Carter during the Iran hostage crisis, and as ‘blowing up in our faces.’

But is it true that Obama’s foreign policy is ‘blowing up in our faces?’ And how could that have been prevented? Rembember, Ryan’s running mate, Mitt Romney, began calling for Hosni Mubarak to step down on Feb 1, 2011. .

Is Ryan reversing that position and saying Obama should have clung to Mubarak? There are only two possibilities, Paul. If you support democratic elections, a majority will express itself democratically, and the Egyptian public might well veto US policies. If you want a puppet dictatorship, well, that might be easier said than done.

There are Republican loonies who wanted to stick with ‘our allies Mubarak and Gaddafi'” like Rep. Louie Gohmert of Texas. Is Ryan channeling him?

Obama stuck with Mubarak almost to the bitter end. He let him go only a few days before he was overthrown, when it was clear from the hundreds of thousands of people in the streets all over the country, and from the army’s announced refusal to intervene, that Mubarak had to go.

Let’s just recall what was happening in Egypt in February, 2011:

What could Obama have done to keep Mubarak in power, if that is what Ryan is advocating? Some honest journalist should ask Ryan if he believes the US government should have encouraged the Egyptian military to shoot down the Egyptian youth who were demonstrating, and how many exactly it would have been legitimate to massacre in that way.

If Ryan actually knew anything about Egypt, he would know that there was no way for Obama to keep Mubarak in power. Moreover, by acquiescing in Mubarak’s departure, Obama got some grudging credit from many Egyptians and took the issue of America’s long years of monetary and diplomatic backing for Mubarak off the table. When I was hanging out in Tahrir Square in summer of 2011, during a revived period of demonstrations demanding that Mubarak be tried, I saw no anti-American posters or graffiti.

If Obama had called Gen. Hussein Tantawi and Gen. Sami Anan in late January of 2011 and told them they had to mobilize troops and shoot the protesters, that would have become known, and the US embassy would not even be there at all anymore, in all likelihood. The Egyptian Revolution would have become an anti-American revolution.

Moreover, shooting the crowds does not work once they are already mobilized. Mohammad Reza Pahlevi tried taking the people out and shooting them on Black Friday in September of 1978, and it arguably was the nail in the coffin of his reign:

So if urging Mubarak to remain in power through genocide is what he has in mind, Ryan is just wrong that it could possibly have worked. Their position, moreover, is highly immoral. Are they really arguing that the United States should have done whatever was necessary, including fomenting massacre, to keep a brutal military dictator in power in the face of popular demands for democracy? Really? That’s your position?

Although it is true that small crowds of hard line hotheads did attack US embassies two weeks ago, the governments of the countries involved intervened to protect the embassies where they could, and apologized to the US for the attacks.

In Libya, angry pro-American crowds attacked the militia headquarters of Muslim militants suspected of involvement in the attack on the US consulate in Benghazi, and drove them out of the city. While it is tragic that the consulate was assaulted at all, and that Ambasador Stevens and 3 others died, that was not Barack Obama’s fault; and where you have the Libyan government and tens of thousands of the people of Benghazi showing solidarity with the US, the episode can’t exactly be viewed as anything blowing up in our faces. Foreign policy is not a matter of a day. It is long term, and long term US relations with the four Arab spring countries (especially Libya) have been good.

The Ryan-Romney attack on Obama’s foreign policy because of a rash embassy demonstrations (one of them very serious) is full of logical holes and hypocrisy. I doubt most of the American public wants to hear it.