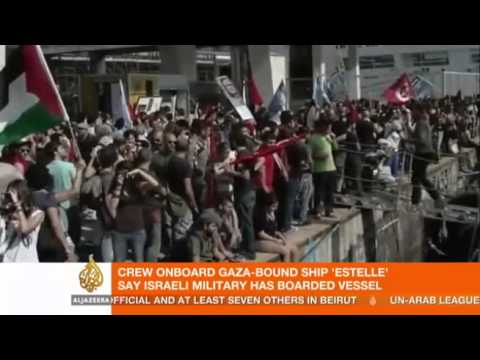 The Israeli navy boarded the aid ship Estelle in international waters on Saturday, illegally commandeering it and kidnapping the 30 persons aboard, including five European parliamentarians and Canadian former member of parliament Jim Manly, who is also a retired minister of the United Church.

The Israeli authorities have imposed a blockade on the civilian Palestinian population of the Gaza Strip. Although the blockade does still block some key imports, its major impact comes from Israel’s refusal to allow most goods produced in Gaza to be exported or to allow its population freely to travel out of the Strip. The blockade has produced massive unemployment and poverty, lack of potable water, widespread food insecurity, startlingly high levels of anemia, and the stunting of poorer childrens’ growth. Since Israel is recognized by the UN as the Occupying authority in Gaza, for it to subject the non-combatant population of 1.7 million to this blockade is illegal in international law and contravenes the 1949 Geneva convention on the treatment of Occupied populations (a set of laws designed to forestall further excesses such as those of the Fascist, Axis powers in the 1930s and 1940s). For more on Gaza see my essay of last Wednesday (click here).

(This aid mission was primarily organized by Swedish and Norwegian groups. Humanitarians in both countries have been particularly vocal about the Israeli mistreatment of Palestinians in Gaza. Prominent Swedish mystery novelist Henning Mankell was himself a passenger in the flotilla of the Mavi Marmara, which the Israeli army attacked in 2009, killing 9 passengers, including one American. Mankell’s detective Kurt Wallander always sees an injustice when it has been committed and is dogged about rectifying it.)

Israeli Prime Minister Binyamin Netanyahu denounced the Estelle aid mission as an attempt to blacken Israel’s reputation. But what seems clear is that it is the blockade of the civilians of Gaza, half of whom are children, that blackens Israel’s reputation. Netanyahu denied that there is a humanitarian crisis in Gaza, but US diplomatic documents demonstrate that his government and that of his predecessor have deliberately attempted to calibrate their punishment of the Palestinians so as to fall just short of producing actual starvation, keeping them on the edge of it. To say that there is not a humanitarian crisis is not the same thing as saying that there is not a set of illegal Israeli policies producing severe humanitarian problems.

Israeli authorities maintain that they must impose the blockade for security reasons, to stop weapons smuggling. But the US diplomatic cables released by Wikileaks demonstrate that the purpose of the blockade is to unseat the Hamas Party-militia in Gaza. Since the most damaging element of the blockade is preventing the exports of most Palestinian products, it can hardly primarily be aimed at preventing imports of weapons. The blockade is a way of punishing non-combatants, and the careful scientific calculations carried out by Israeli authorities of how they could keep the Palestinians alive while they were being denied anything but essential nutrition is just about the creepiest thing I’ve heard of since the end of the colonial era in the 1960s.

The European members of parliament aboard were: From Greece: Vangelis Diamandopoulos and Dimitris Kodelas; from Norway: Aksel Hagen; from Spain: Ricardo Sixto Iglesias; and from Sweden: Sven Britton. Ricardo Sixto is a member of the United Left bloc from Valencia and has a degree in History and Geography from the University of Valencia.

Aksel Hagen has a doctorate in life sciences and is an activist in the areas of education and the increasing gap between the rich and the poor. Sven Britton is a physician and academic specialist in infectious diseases, and feels strongly about the health impact of the blockade on the people of Gaza:

By the way, I think the American wire services and newspapers that report on this incident but neglect to name these names are not doing real journalism, since the presence of the sitting parliamentarians is a significant part of this story. It is a slap in the face of the European Union and completely outrageous that sitting members of parliaments of its member states should be attacked in international waters and illegally kidnapped and falsely accused of being illegal immigrants into Israel!

When the left next gets in, in Sweden and Spain and the other countries represented, and some sorts of boycott of Israel are considered, how do you think these parliamentarians will vote? The Israeli right wing rather disgracefully hides behind accusations of anti-Jewish racism in explaining such sentiments, but never considers that bad Israeli policies are eliciting critiques of . . . bad Israeli policies. (Not to mention that it is falling down funny for the far right wing Likud Party to go around accusing other people of racism!)

Even as it is, the Swedish government considers there to be a severe humanitarian situation in Gaza and says it would therefore have been reasonable to let the ship proceed.

Another reason the parliamentarians should be reported on is fairness: if US Congressmen were on such a mission and were kidnapped on the high seas this way, you can bet that they would be named and interviewed by the press. That it has to be the bloggers that provide this level of detail is one reason that the newspapers are in trouble– they are often too timid in the face of powerful single-issue lobbies that want to shape the news; and some of them, such as the Murdoch newspapers, are actively complicit with many of those lobbies, indeed, part of them.

The other passengers are listed at the end of this Turkish article.