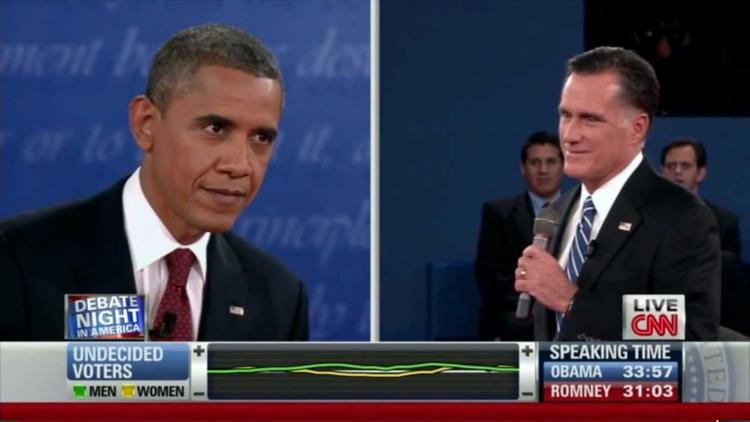 1. Romney attempted to convey the impression that he has worked to increase women’s employment as governor, reaching out to women’s groups and receiving “binders of women” from them. (Yes, that is what he said). But Romney made no effort to hire women managers at Bain Capital, and even today only 4 of out of 49 of Bain’s managing directors are women.

2. Romney maintained that President Obama did not publicly refer to the attack on the consulate in Benghazi as an “act of terror” for two weeks after it happened.

As moderator Candy Crowley pointed out in real time, Romney was completely wrong about that.

In his speech from the Rose Garden on September 12, 2012, Obama said, “No acts of terror will ever shake the resolve of this great nation, alter that character, or eclipse the light of the values that we stand for.”

Romney’s charge was disturbing for several reasons. First, he was wrong on the facts, which cannot inspire confidence in him. Second, he reminded people of his outrageous attack on Obama while the Benghazi incident was unfolding, in which he incorrectly said that Obama had made excuses for the attackers. Third, he had to be slapped down by the moderator for telling a whopper, which is not the image a candidate would like in the public mind.

3. Romney pretended to be a big booster of coal and blamed that industry’s woes on Obama. Actually, the larger problem coal faces is that fracked natural gas is cheaper and cleaner, and coal plants can’t compete, which has little to do with Obama. Romney’s posturing gave Obama an opening to correctly quote Romney as Massachusetts government determined to close the coal plant and saying, “”I will not create jobs or hold jobs that kill people, and that plant — that plant kills people.”.” Romney blew up a big balloon full of hot air that Obama readily punctured.

Here’s Romney’s original condemnation of the coal plant (whatever happened to that guy?):

4. Contrary to Romney’s assertion, oil production on Federal land did not decline during Obama’s presidency over all. In fact, it was way up from the last year of Bush. There was a decline in 2011 because of a temporary offshore moratorium caused by the Deep Horizon malfeasance

5. Romney represented himself as a supporter of college students but in fact Romney has slammed Obama for doubling the number of Pell grants– which are low-cost Federal loans for . . . college students.

6. Romney said, “We have fewer people working today than we had when the president took office. If the — the unemployment rate was 7.8 percent when he took office, it’s 7.8 percent now.” But when Obama took office, the country was still losing 800,000 jobs a month because of the Bush meltdown. Obama obviously needed a year or so to get his policies in place and implemented. You can’t just start the clock ticking from the inauguration– in something like economic trends, you have to take a longer view. In January of 2010, the unemployment rate was 9.7%, after all the Bush-caused hemorrhaging. Obama has improved that number he inherited to 7.8%.

7. On energy, Romney said “Let’s take advantage of the energy resources we have, as well as the energy sources for the future.” Romney is posturing as a friend of green energy! But as Obama noted, the former governor wants to cut the Federal tax break aimed at encouraging wind energy, something he has been slammed for by Republican Senator Chuck Grassley of Iowa.

8. Romney said, “And if we do that, if we do what I’m planning on doing, which is getting us energy independent, North America energy independence within eight years, you’re going to see manufacturing jobs come back.” The United States imports roughly 11 million barrels a day of petroleum. Contrary to what is often alleged, that level of imports has not fallen significantly. We use about 19 million barrels a day, and there is a shortfall of about 8 million a day (we export some of our own production in Alaska to Asia since it is cheaper to do that than bring it down to the lower 48, making for net imports of 8 million b/d). There is no scenario under which the United States increases its production by 8 million barrels a day in the next 8 years, or, like, ever. That would be like discovering a whole Saudi Arabia in the US. In fact, most of our current fields are declining and even with new production we are unlikely to produce more than about 6 million b/d of oil in the coming decades. There is only one path to energy independence for the US with regard to transportation, and that is a combination of green energy and hybrid or electric cars. This is also the only path to an America that is not destroying the world by dumping enormous amounts of carbon dioxide into the air, causing climate change (something neither candidate had the gumption to bring up).

9. Romney alleged, “When the president took office, the price of gasoline here in Nassau County was about $1.86 a gallon. Now, it’s $4.00 a gallon. The price of electricity is up.” Obama correctly riposted that the low gas prices of fall 2008 were caused by the Bush-induced economic collapse. And Obama pointed to increased Asian demand as the reason for the current high prices (as more and more Asians drive, they use more gasoline to fuel their vehicles; since world supply is fairly steady at 89 mn b/d, more use equals rising prices.). The fact is that the president has little to do with oil prices– they are set by supply and demand, and contrary to what Romney alleges, there simply is not much supply in the United States yet to be developed. Neither Romney nor Obama mentioned a further consideration, which is that some of the run up in petroleum prices comes from taking Iranian oil off the market through sanctions (less supply equals higher prices if demand does not fall). Romney says his Iran sanctions would be even worse (hard to imagine). You can’t reduce supply without increasing prices.

10. Romney’s biggest mistake was using the same technique as in the first debate, of denying or papering over all the right wing stances he took last spring. The Obama team didn’t stare slack-jawed at the repeat performance, for which they were prepared. Romney could have gone back to appeasing the Tea Party for this debate, which would have really confused Obama.