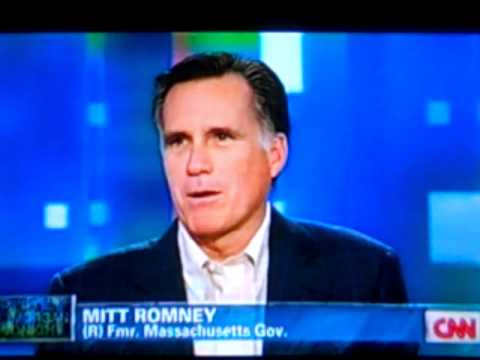 ” Is — are Israel and the Palestinians closer to — to reaching a peace agreement? No, they haven’t had talks in two years. We have not seen the progress we need to have . . .”

But in a secretly videotaped fundraiser in Boca Raton last May, Romney had said about the Israel-Palestine conflict:

“So what you do is, you say, you move things along the best way you can. You hope for some degree of stability, but you recognize that this is going to remain an unsolved problem….and we kick the ball down the field and hope that ultimately, somehow, something will happen and resolve it.”

So in public Romney is criticizing Obama for lack of progress in the peace process, without mentioning that Israeli Prime Minister Binyamin Netanyahu has in the past actually boasted about derailing the Oslo peace accords. But in private he admitted that likely under these circumstances, no progress is likely, and that the ball would have to be kicked down the field.

“Well, we’re going to be finished by 2014. And when I’m president, we’ll make sure we bring our troops out by the end of 2014. The commanders and the generals there are on track to do so. We’ve seen progress over the past several years. The surge has been successful, and the training program is proceeding apace.”

Although Romney had earlier generally given an impression of concurring with the 2014 withdrawal date, he had earlier hedged it by saying:

“I will evaluate conditions on the ground and solicit the best advice of our military commanders . . .”

So before, he implied that Obama was riding roughshod over the Joint Chiefs of Staff in high-handedly making Afghanistan policy, whereas he, Romney would defer to them. Now he has withdrawn that objection, acknowledging that the Pentagon is on board with this withdrawal timetable.

On the Egyptian Revolution

“But once it exploded, I felt the same as the president did, which is these — these freedom voices in the — the streets of Egypt where the people who were speaking of our principles and the — the — President Mubarak had done things which were unimaginable, and the idea of him crushing his people was not something that we could possibly support.”

But on Feb. 1, 2011, Romney had refused to call Egyptian President Hosni Mubarak “a dictator:”

So during the uprising Romney avoided the word “dictator,” but now he admits that Mubarak had done things that were unimaginable (i.e. dictatorial things?)

Romney said Monday, “We don’t want another Iraq.” He said it in the context of diplomatic efforts to convince Muslims to abandon radicalism. He seems to be admitting that the Iraq War was an error.

If Romney views the Iraq War has having been about religious extremism, he should be reminded that the Baath regime in Iraq, horrible as it was, was a secular nationalist one that repressed religious fundamentalism.