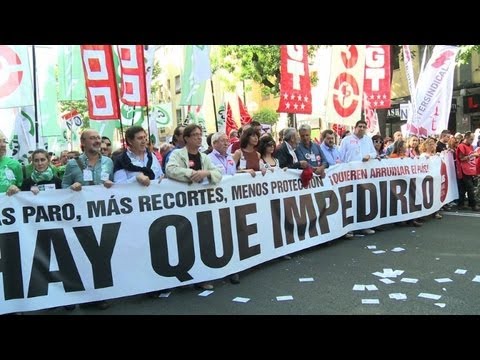 Mitt Romney has caused a tiff with Spain by saying that its economic crisis was caused by government over-spending and saying he doesn’t want the US to end up like Spain. The Spanish are bewildered, since Romney’s charge (like most of the things he said in last week’s debate) is simply untrue. So here are the top ten lessons we can draw from Romney’s ongoing War on Europe:

1. Mitt Romney is the least diplomatic politician in America, having by now managed to imply that the British might not be up to hosting the Olympics, that Russia is our Enemy No. 1, that the Palestinians do not exist, and that Spain’s economic woes come from budget deficits.

2. Romney doesn’t know anything about Europe’s economic crisis, since in fact Spain’s government ran lower deficits than most European countries in the run-up to the 2008 crisis.

3. Romney consistently tries to shift blame for any problem away from the private sector onto the government, even when this approach involves out-and-out falsehoods.

4. Romney doesn’t know that Spain’s crisis mainly derives from the private sector and has to do with the bursting of a real estate bubble.

5. Romney doesn’t seem to know that last year Spain elected a conservative government headed by Prime Minister Mariano Rajoy, which is dedicated to exactly the kind of fiscal discipline and austerity that Romney favors.

6. Romney doesn’t know that Rajoy’s determination to stop running budget deficits have repeatedly provoked tens thousands of people to take to the streets in Spain, including students objecting to cuts to education.

7. Romney doesn’t know that Rajoy’s austerity policies have demonstrably worsened Spain’s crisis and increased its unemployment. Romney thinks Obama’s 7.8 percent unemployment rate is an illusion, but it was achieved by government spending to kickstart an economy from which entrepreneurs like Romney had withdrawn– i.e. Obama did the opposite of what Rajoy is doing, and Obama’s way is working.

8. Romney doesn’t know that sacrificing all just for the sake of a balanced budget has turned Spain into a nation of hobos and has deeply damaged the education system. (He wants to do the same thing to us.)

9. Romney only seems to trust ‘Anglo-Saxons.’

10. Romney seems to think that the entire nation of Spain is in the 47%, along, perhaps, with everyone of Spanish heritage.