The Washington Post: is it telling the whole story?

Alongside the Washington Post’s latest blockbuster reports on the Obama administration’s drone kill list is a new graphic, depicting US covert strikes since 2002.

Based on studies by monitoring organisations, the graphic lists hundreds of US drone strikes in Pakistan, Yemen and Somalia, in what the paper says will be a regularly updated project. Also detailed are ‘the names of prominent militant leaders killed in individual strikes,’ the paper says.

But there the information stops.

All other casualty information has been stripped from the Washington Post’s data. There is no reference to the numbers reported killed in each strike. No names or numbers are put to the civilians killed.

In short, the paper has removed much of the information that is most valuable for assessing the effectiveness of the US drone campaign.

As a series of emails between the Washington Post and the Bureau reveals, the decision to strip out pertinent casualty data was an editorial one, and was part of broader ‘reservations and concerns’ at the paper concerning casualty counts.

An examination of the Post’s reporting indicates the paper frequently omits credible reports of civilian deaths in US covert drone strikes.

So concerned was the Bureau at the Washington Post’s intention to strip away casualty information that it has refused permission for the paper to use its work in such a significantly amended form. 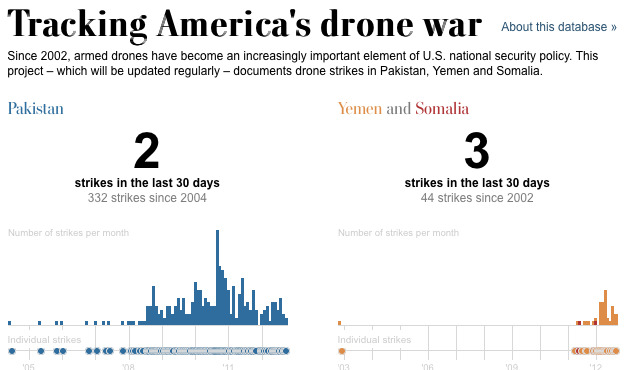 ‘No casualty counts’
The graphics editor of the Washington Post first approached the Bureau directly on September 18 asking to make use of the Bureau’s full dataset, having initially tried to obtain the information indirectly via the Guardian.

The Bureau allows full and free access to its data under a Creative Commons licence. In recent weeks, both the Guardian in the UK and Al Akhbar in Lebanon have used its data to map drone strikes in Pakistan and Yemen.

In a series of emails with senior Bureau staff, the Washington Post graphics editor noted that ‘TBIJ indeed does have the most accurate and comprehensive public representation of drone strikes.’

Nevertheless the Post’s plan was to aggregate data from the Bureau, the New America Foundation and the Long War Journal ‘in a way that will not highlight casualty counts’.

In response the Bureau noted that while drone casualty counts are a challenge, ‘who dies, and in what numbers, are the most critical questions that the data can address’.

The Bureau went on to ask: ‘Are you aiming to name militant leaders killed, for example, or only to map the locations of each strike/ frequencies? If the former, there is surely also a necessity to name all civilians recorded killed. If you only map events, how does a user distinguish between a strike that kills no one and an event that kills 80?’

In response, the graphics editor wrote on September 24: ‘I’ve spoken to editors and reporters on our foreign desk on Friday. Due to the same reservations and concerns about the casualty counts that I mentioned previously, we will not be showing casualty counts.’

The Bureau’s managing editor Iain Overton expressed concern about the Washington Post using Bureau data in such an altered form. The Post’s published graphic only employs New America Foundation and Long War Journal material – and all casualty counts have been removed.

There are issues around the recording of casualties from US drone strikes – civilian or otherwise – given the reporting challenges they present. Critics argue there is too much incentive for individuals to exaggerate claims of civilian deaths for propaganda purposes.

That does not explain why reported civilian casualties continue to decline steeply in Pakistan and elsewhere. Nor does it explain why casualty counts by the Bureau and others appear close to the US government’s own overall estimates of the numbers killed.

By stripping away the casualty data I’m not sure what’s left. They have also introduced their own bias into the recording, by selectively choosing which information to retain’
– Elizabeth Minor, Oxford Research Group

The identities of civilian victims are known for three of the four attacks. On August 18 the wife of militant Ahsan Aziz died. Three days later a 13-year-old boy and relative of militant leader Badruddin Haqqani was reported killed. And on October 24 the wife of schoolteacher Reshmeen Khan died as she walked in a field adjacent to a drone strike

Only for an incident in May in which worshippers in a mosque were reported killed are there no biographical details in any of the reporting.

While the Washington Post frequently notes the deaths of senior militants, no mention of reported civilian casualties was made by the Post for three of the four 2012 cases cited above. Only for the October 24 event did the Post run an agency report stating that a woman had probably been killed.

The deaths of 11 civilians in an alleged US drone strike in Yemen on September 2 was also not reported by the paper, it seems.

In response to a recent complaint about its coverage of non-combatant deaths, the Washington Post insisted that it is ‘committed to documenting the deaths of civilians, as our coverage broadly shows.’

‘Dangerous editorial cut-off’
Just down the road from the Washington Post’s headquarters, experts gathered in the city on October 22 for the release of the largest-ever study into the recording of casualties in conflicts.

Funded by the Swiss government and the US Institute of Peace, the Oxford Research Group report examined casualty recording by more than 40 organisations (including the Bureau) across the world. It concluded that ‘useful documentation of deaths from conflict can be done even during intense conflict, and in repressive and dangerous environments.’

Elizabeth Minor, the report’s author, expressed surprise that the Washington Post would remove what she says is the most important information being collected, no matter how incomplete.

‘By stripping away the casualty data I’m not sure what’s left. They have also introduced their own bias into the recording, by selectively choosing which information to retain,’ Minor told the Bureau.

‘A better approach might be for the Post to publish all available information, transparently sourced, and so allow the reader to make up his or her mind as to its validity.’

The decision by the Washington Post to strip away casualty figures from its data – and to downplay civilian deaths – appears at heart a political call. As the Bureau’s managing editor Iain Overton notes, ‘We would be very happy to work in collaboration with the paper on its coverage of drone warfare.

‘However, we believe that to give a full and comprehensive view of the current situation in Pakistan and beyond, it’s incumbent on journalists to include credible casualty reports. To ignore this area simply because the information is imperfect or awkward is a dangerous editorial cut-off.’