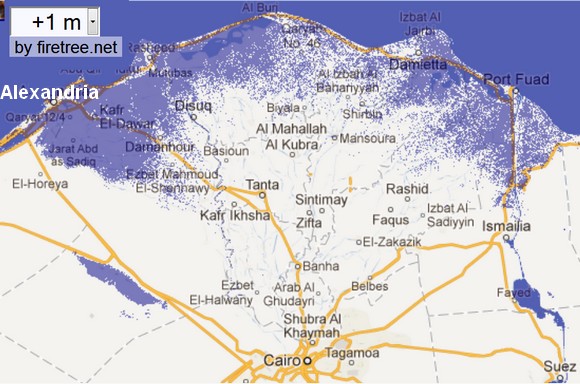 COP18, the Climate Change Conference held in Doha, Qatar, is a dismal failure, with the United States and Russia being the chief villains. The failure of the world’s leaders to have their hair on fire about the extreme challenges of the climate change we are producing with our carbon dioxide and other greenhouse gas emissions has imperilled some countries more than others. Subsaharan Africa is in the firing line for the worst effects of climate change. But the low-lying areas of West Bengal and Bangladesh, and of the Egyptian Delta, are especially vulnerable to the one-meter sea level rise that the COP18 failure has ensured will occur within 80 years.

Here at geology.com there is a useful web tool that lets you see what the world looks like with a 1-meter (about three feet) sea level rise, which is now certain to occur by the end of this century. Actually, in past eons, a one-degree Centigrade increase in average temperature has produced a 10-20 meter rise in the seas. We are certainly going to exceed a 2-degree C. increase, so we could see a 20-40 meter increase, i.e. 60 to 120 feet. Obviously that would put a lot of our current land under water, but it will take a long time for that extreme rise to occur. The seas are very cold, very deep and very big, and circulate slowly, so that they will take thousands of years to warm. Once they do, human beings will be in big trouble. And even these enormous, icy bodies of water will warm up a bit by 2100, causing sea level rises of at least a meter, and maybe two. This is what Egypt would look like with a one-meter rise (and no, you can’t build sea dikes to deal with that kind of increase):

The city of Alexandria, celebrated in the poetry of Cavafy and the novels of Lawrence Durrell– with its 4.5 million population– has no more than 80 years to live. Note that Alexandria is bigger than Chicago (inside city limits), America’s third-largest city. The Delta city of Damanhour, where Muslim Brothers and their rivals clashed last week, leaving a young man dead? Under water. The ports of Damietta and Rosetta? Gone.

Alexandria is a key port for Egypt, with necessary infrastructure, through which 4/5s of the country’s imports are brought in.

A one-meter/ yard increase in sea level will inundate much of Egypt’s fertile Delta, displacing at least 10% of the country’s people and bringing salt water into the country’s breadbasket.

Among all the countries of the world, Egypt is among those most at risk from human-induced climate change. Given the Aswan Dam, they are not big polluters themselves.

If I were Egypt, I’d sue the US and China for the tort of making a tenth of the country or more sink beneath the waves.