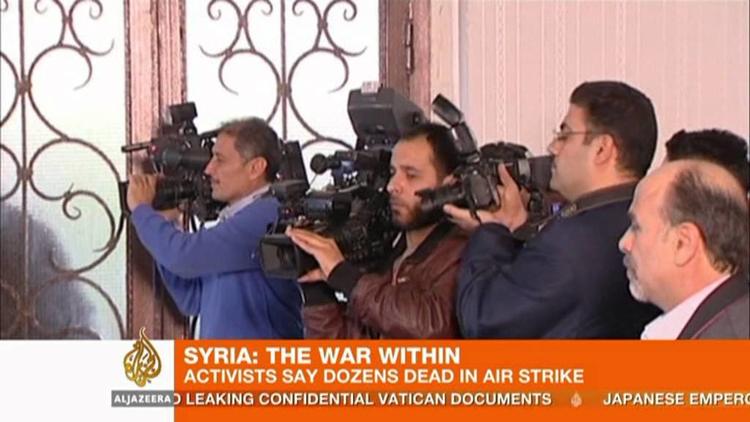 Opposition forces said that Syrian fighter jets bombed the town of Halfaya near Hama on Sunday. The bombs struck a crowd standing in line to buy bread, and some 200 victims are said to have been killed, and dozens more injured.

The attack on Halfaya likely was the regime’s response to its fighters confronting the pro-government shabiha militias based in two largely Christian towns nearby. The shabiha death squads are formed of Alawi Shiite criminal gangs who used to be used by members of the ruling al-Assad family for smuggling and extortion. The upper echelons of Syria’s Baath government are filled by members of the Alawi Shiite minority, which forms about 10 percent of the population. Most Syrians are Sunni Arabs, but about 35% belong to religious or ethnic minorities.

Arabic language reports allege that most of the victims were children. Videotape of the horrible death toll emerged on the web, though as with all news from Syria it cannot be independently verified.

That many victims were children does make sense, since it is common in the Levant for families to send them with some coins to buy bread.

Also over the weekend, opposition fighters in Aleppo took over yet another regime military base, using the cover of a heavy fog. The al-Hawa base had housed 120 infantrymen. They regime’s position in the north of the country seems to be collapsing, since it has lost control of trunk roads leading north from the capital of Damascus, cutting remaining troops off from resupply. The regime also now faces difficulty in receiving Russian and Iranian weaponry and ammunition, because of the fighting at Damascus airport.

UN special envoy Lakhdar Brahimi went back to Damascus on Sunday, but had to fly into Beirut and go overland because of clashes near Damascus’s international airport. Opposition leaders told the Arabic press that the time for a political solution has long since passed.

With every passing month, the Syrian state seems to control less and less territory and to hold the loyalty of fewer and fewer of its citizens. The only question seems to be when Damascus will finally rise up and move against the presidential palace.