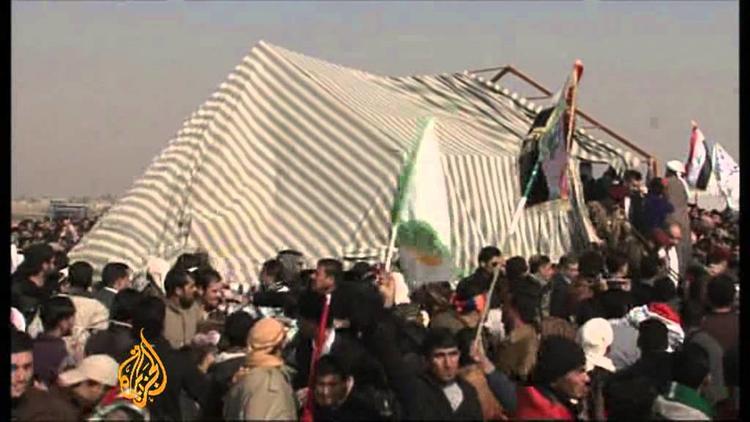 Demonstrations and rallies began being held in the largely Sunni Arab province of al-Anbar and spread to Samarra (Salahuddin) and Nineva in Iraq on December 26. Sometimes crowds flew the flag of the Free Syrian Army, with which Iraqi Sunnis often identify, since the FSA is fighting a Shiite-dominated regime.

The Sunni Arab youth are chanting, “the people want the fall of the regime,” in emulation of the revolutionary crowds two years ago in Tunisia and then Egypt. The initial protests concerned the arrest of 10 bodyguards of the Finance Minister, Rafi al-Issawi, on suspicion of involvement in terrorism.

On Sunday, 3 people were injured in a melee that broke out when deputy prime minister Saleh Mutlak attempted to address angry demonstrators in al-Anbar. Mutlak is a prominent Sunni Arab and a member of the Iraqiya political party. The angry crowds cut him no slack for being a Sunni Arab. What enraged them was that Mutlak serves with al-Maliki at all. They pelted Mutlak and his entourage with stones and empty bottles, driving them away.

Among the demands of the angry crowds are

Thy allege that Sunni young women imprisoned by al-Maliki’s forces are raped in prison. Al-Maliki said Monday morning that the women prisoners would be released. The practice of arbitrarily arresting thousands of Sunnis who happened to be in the vicinity of attacks began under the US military when it occupied Iraq. In 2007 there were some 25,000 Iraqi prisoners, mostly Sunni Arab, in US prisons in Iraq, and 25,000 in the hands of the Shiite government in Baghdad.

Shiite member of parliament Abd al-Salam al-Maliki, representing the ruling State of Law coalition of PM Nouri al-Maliki, warned that elements of the Free Syrian Army and al-Qaeda might come over the border to Falluja, Samarra and Mosul, and infiltrate the demonstrations, using them as a cover to commit terrorist attacks. MP Abd al-Salam’s statements are outrageous, since there is no Free Syrian Army operating in the Sunni areas of Arab Iraq, and he is attempting to tar the demonstrators with the brush terrorism.

His remarks reveal the close connection Baghdad sees between instability in Syria and instability in Iraq, in both cases, the MP alleged, driven by nothing more than American hatred of the Shiites.

Some of the slogans and demands of the demonstrations have evinced nostalgia for Sunni rule of Iraq, and there have even been rumors that the crowds want to fly the Saddam Hussein version of the Iraqi flag. The USG Open Source Center paraphrased a report on Dec. 28 in Al-Sabah newspaper “citing Al-Anbar Governor Qasim al-Fahdawi as affirming that during their telephone conversation yesterday, 28 December, Prime Minister Nuri al-Maliki agreed to transfer the cases of alleged raped female prisoners to the Al-Anbar Court of Appeal. The report cites Salah al-Ubaydi, spokesman for Shiite Leader Muqtada al-Sadr, as regretting the raising of sectarian slogans at the demonstrations staged in the Al-Anbar Governorate. The report cites Hakim al-Zamili, parliament member for the Al-Ahrar Bloc, as saying that his trend does not participate in demonstrations raising the former regime’s flag. The report focuses on the demonstrations staged in Al-Ramadi and Mosul yesterday [Dec. 27].”

Iraq was ruled by a Sunni-dominated Baath regime 1968-2003, which was overthrown by George W. Bush. Under American rule, the majority Shiites came to power. They instituted ‘debaathification,’ politically banning many Sunni Arabs.