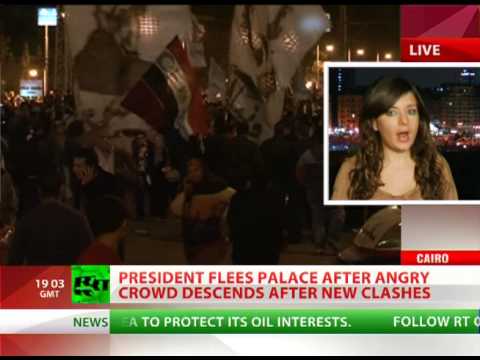 On Tuesday, another big wave of protests was held against the policies of President Muhammad Morsi of the Muslim Brotherhood, with rallies in in the public squares of most of Egypt’s major cities. The protests were called “The Final Warning.” Many newspapers and television stations went dark, while big rallies were held in Tahrir Square (downtown Cairo) and at the residence of the president in Heliopolis. Some 100,000 demonstrators marched on the presidential residence, broke through a barbed wire barrier, and engaged in clashes with police, who initially fired tear gas and tried to repel them. Then, abruptly, according Arabic wire services, the police allowed the crowd to approach the building, prompting Morsi to flee the building. Russia Today’s correspondent, an eyewitness, said that a section of the police sought protection from the crowd, afraid of being overwhelmed, and the protesters then threw up a cordon around them.

The sight of the elected president of Egypt forced out of the presidential palace by angry demonstrators has to join other iconic images of the nearly two-year-old Egyptian revolution.

Alarabiya is reporting that the demonstrators gave Morsi until Friday to renounce his constitutional declaration of November 22, which placed him and his decisions beyond the review powers of the courts. Many of the demonstrators also want the draft constitution, placed before the president by a Muslim Brotherhood-dominated Constituent Assembly last Saturday, withdrawn.

A separate, huge, rally was held in downtown Cairo at Tahrir Square, and some of the demonstrators at the presidential palace returned there to share what had happened. (Tahrir when in demonstration mode typically has several makeshift stages, and people mount them to speak into a microphone to the crowd.

The new constitution, which guarantees many rights but is vague about others and has articles that could be a trojan horse for crackdowns by Muslim authorities, is scheduled to be voted on by the people on December 15. But 90% of Egyptian judges are refusing to oversee the vote (this role for them is required by law).

Scroll down this page for a great collection of pictures from various protest sites on Tuesday.

There was also a truly massive protest in Alexandria.

For what’s going on outside Cairo, see the report by Lamia Hassan at “Your Middle East”